Family is the recipe for success

“The best part of TCC was the self satisfaction and doing it together.” – Latonia Darien-Grundy, who became a TCC alumna in December with her mother, Marie Grimes 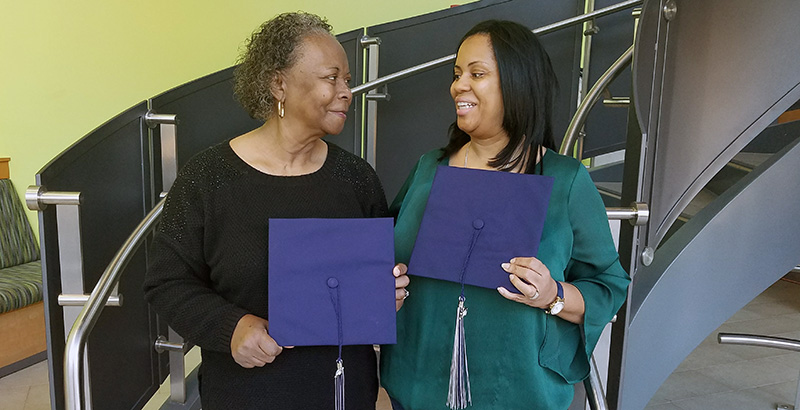 Last month, the pair made another walk, across the stage at the Ted Constant Convocation Center, to receive their associate degrees together from TCC.

“Never in a million years did I think we’d graduate together,” said Darien-Grundy.  “We were both crying tears of joy.’’

Grimes, 72, was the college’s oldest graduate among a class of nearly 1,800 at the 65th Commencement Exercises.

“I surprised even myself that I accomplished this in my 70s,” Grimes said.

Grimes credits her daughter with inspiring her to go to college.

“She kept telling me how great TCC was and how much she was enjoying the people,” she said. “I was retired from banking and really felt that there was more for me to learn.”

Grimes selected culinary arts because she enjoys cooking and baking. She got her start working in the kitchen with her mother, Verna Williams, at age 10. The pair still cooks and bakes together. Grimes said her mom, now in her 90s, still makes the best liver and onions, cornbread and sweet potato pie.

Darien-Grundy, the married mother of two sons, said when her family relocated to Hampton Roads, she knew it was finally time to pursue a degree. She had tried college before, but this time had the perseverance to succeed.

“I was nervous when I started,” she said. “But I found the friendliest people, caring professors and some amazing friends.”

Darien-Grundy has worked in banking for more than 30 years and currently is a bank security specialist at Towne Bank.

“It was tough to study and work full time and meet so many deadlines, but I’d absolutely do it again. It was worth every minute for the mobility and self-satisfaction,” she said.

Grimes works at Farmer Frank’s Country Diner in Suffolk, preparing baked goods and sweets. “They call me the candy lady,” she said with a laugh. “It really doesn’t feel like work, because I enjoy it so much.”

A seasoned cook before college, Grimes took the advice of one of TCC’s chefs who told her to forget everything she knew. It’s the best advice she received.

“I learned so many new things from how to fillet a fish to the spice palates of different countries,” she said. “This degree has taken my cooking to a whole new level.”

Grimes hopes to eventually open a bakery and brunch place. She envisions an eatery where customers can relax, enjoy breakfast foods past 11 a.m. and then take some sweets home to the family.

Darien-Grundy plans to return to TCC to earn an Associate of Applied Science in Health Information Management, as she has always wanted to work in the healthcare field.

“Not too many mothers and daughters get to do this together,” Darien-Grundy said. “I really wanted to make my mom proud, and I’ve done that.”

Now Darien-Grundy’s youngest son is following in her footsteps. Asante Grundy is pursuing an Associate of Science in General Studies and hopes to transfer to Penn State.