“Once I found my passion, my education became the most fascinating ride of my life.” – Shelby Ouellette 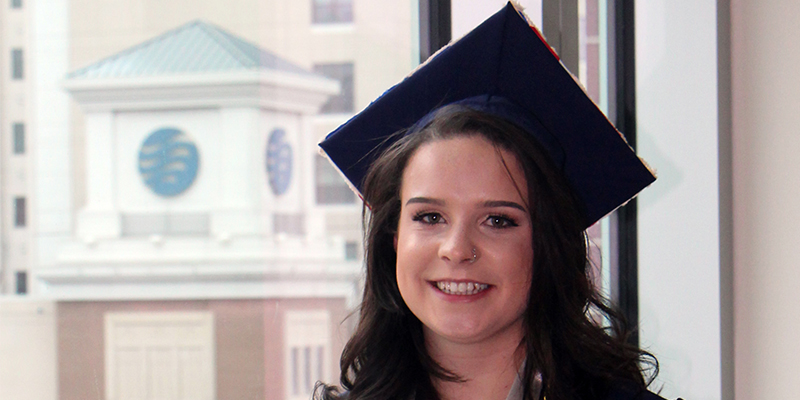 Shelby Ouellette was working at Starbucks when the store hosted “Coffee with a Cop.” She enjoyed the interactions with police officers and the community so much she decided to pursue a degree in Criminal Justice.

“That day just sparked something in me that I wanted to do something to effect positive change,” she said.

Shelby, 21, selected Tidewater Community College because it was affordable and close to home. She began taking classes in December 2019.

Two years and a pandemic later, Shelby is graduating and will be the Student Speaker for TCC’s  Commencement Exercises on Dec. 20. She will walk the stage at Chartway Arena as she earns an Associate of Applied Science in Criminal Justice.

“When I was in high school, I wasn’t considered smart by my teachers and they had pretty low expectations for me,” Shelby said. “Once I found my passion and set goals, my education became the most fascinating ride of my life.”

Shelby started at TCC just before all students were moved to remote learning. Previously she had been unsuccessful with online college, so she was concerned that she would have difficulties again.

“It was very hard at first, but my professors made it impossible to fail. As long as I did the work and attended classes online, I was able to keep the learning going,” she said.

“My favorite thing about TCC is that we were a community, even when we were only meeting in Zoom rooms online.  It was almost easier to engage classmates because everyone was comfortable in their own space while interacting virtually,” she said.

A member of Phi Theta Kappa, Shelby earned a 3.8 GPA at TCC and found full-time work as a legal assistant for a local law firm.

She will continue her education through the Honors College at Regent University where she will study government and pre-law.

Shelby also hopes to attend law school and one-day practice criminal defense. Her ultimate goal is a career in politics where she can help foster change in the criminal justice system.

A Navy spouse, Shelby and her husband Payton are from a small town in Illinois and now call Virginia Beach home. The couple has three lively dogs to keep every day interesting.