Gov. Northam gets an up-close look at the college's hands-on training in the health care fields, which are among the targeted training programs for the "Get Skilled, Get a Job, Give Back" proposal in the budget before the General Assembly. 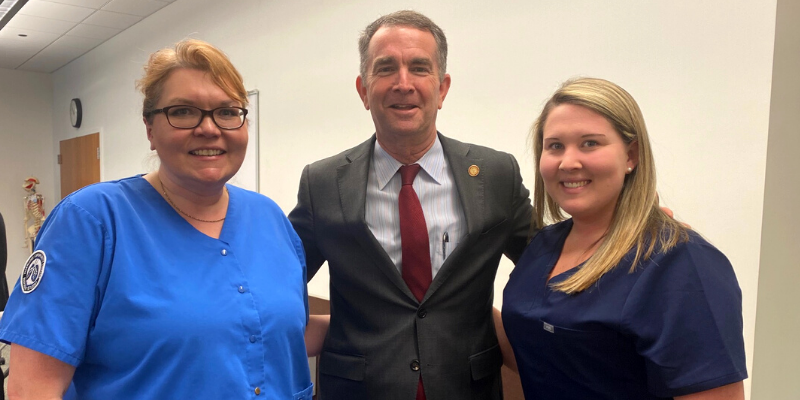 March 5, 2020 | Vicki L. Friedman, vfriedman@tcc.edu
Gov. Northam with TCC respiratory therapy students Krystle Pomory and Taylor Moneypenny. Both students have jobs prior to their May graduation.

On Thursday, Gov. Ralph Northam observed Tidewater Community College respiratory therapy student Taylor Moneypenny inflate a pig lung, which has an anatomical structure similar to that of a human. In an ambulance bay, Northam listened to a bleeding man writhing in pain while emergency medical service students tended to his injuries. He watched diagnostic medical sonography students complete sonograms on their peers using state-of-the-art equipment.

His hour-long tour of TCC’s Regional Health Professions Center on the Virginia Beach Campus provided an up-close glimpse of students preparing for careers in health care, one of five in-demand areas included in an initiative in his proposed budget before the General Assembly. The “Get Skilled, Get a Job, Give Back” initiative, dubbed G3, proposes a free community college education in incentivized areas for students who meet certain income requirements.

The other fields are skilled trades, information technology, early childhood education and public safety, but health care is the primary focus.

“Health-care systems are craving for your talent,” Gov. Northam told students afterward during informal remarks before TCC President Marcia Conston; Megan Healy, chief workforce development advisor in the governor’s office; and representatives from Sentara Health and Bon Secours, two of the college’s regional partners. “There’s not enough people to fill these much-needed jobs. What we’re trying to do at the state level is to really open up what I call that classroom-to-career pipeline and train individuals for these 21st-century jobs.”

Because of the governor’s background in health care – he worked as a pediatric neurologist prior to being elected in 2017 – he was able to appreciate the hands-on learning inside the 6,500-square-foot Regional Health Professions Center. “I almost want to get in here and get my hands dirty,” he quipped. He was particularly awestruck by the scene in the ambulance bay, as authentic-looking “blood” leaked from a surgical cut suit.

But mainly Northam wanted to stress his commitment to what’s been called a gamechanger. G3 would boost funding to Virginia’s Community Colleges by $145 million over the next two budget years and enable an estimated 39,000 low- and moderate-income Virginians to enroll without cost in the targeted programs.

“We are excited about G3,” President Conston told the governor, pumping her fist. “We are poised to get students trained so they can be competitive in the workforce.”

TCC offers associate and certificate programs in all of the targeted areas.

G3 eligibility would be established by students completing the Free Application for Federal Student Aid (FAFSA). G3 funds would make up the difference between what financial aid pays for and the cost of tuition, fees, and books for the program.

In response to a student question, Gov. Northam stressed the importance of wraparound services, noting academics are typically not the reason students drop out of community college. “It’s because of affordability,” he said.

Healy said students who attend college full time under the G3 program and are awarded a full Pell Grant would receive an additional $1,000 grant per semester in support of expenses that include food and childcare.

“We want to make sure that all Virginians have access to attending a community college without incurring a lot of extra debt,” Gov. Northam said. “That’s the G3 program and that’s why we’re here today.”