Shawn Avery, president and chief executive officer of the Hampton Roads Workforce Council, presented the academy with a check for $25,000. 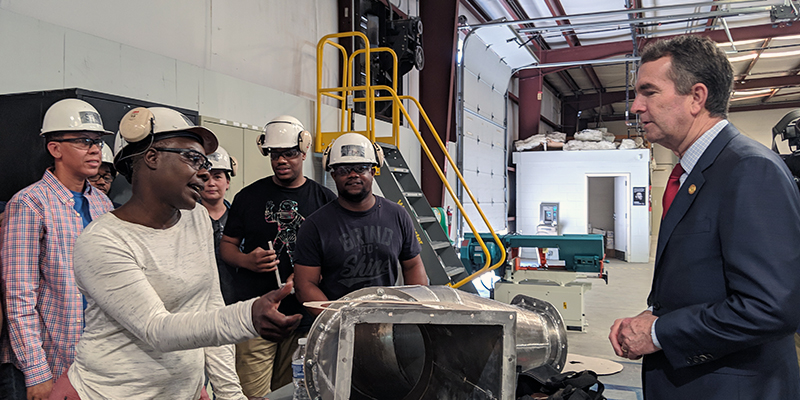 Tidewater Community College’s Skilled Trades Academy in Portsmouth received a visit from Gov. Ralph Northam on Wednesday and a gift from the Hampton Roads Workforce Council that will allow the new training center to better serve its apprentices preparing for some of the most in-demand jobs in the commonwealth.

“We used to talk about blue collar versus white collar; we really refer to these as new collar jobs,” said Gov. Northam, who stopped at the Skilled Trades Academy as part of his Build Virginia Regional Tour. “They are jobs that are paying very well and ones that don’t necessarily need a four-year college education.” 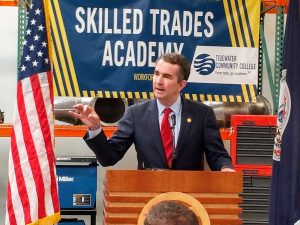 Gov. Northam touted Virginia’s Community Colleges for training the new workforce in response to regional demands in the construction and shipbuilding industries. “I applaud Tidewater Community College for their leadership,” he said.

The 20,000-square-foot Skilled Trades Academy opened last December and has since trained 300 students, many of them in pre-hire programs, including Jarvis Hyman, 35. Hyman is completing a 10-day training program in sheet metal for Newport News Shipbuilding.

“I worked in retail for 13 years and was looking for a career change,” he said. “I love the challenge of this, and I can see myself in it for a career.” 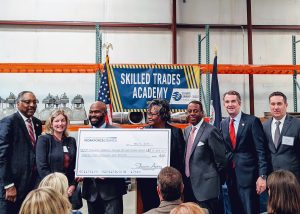 “Tidewater Community College is one of our strongest partners,” Avery said. “Our board is committed to the skilled trades. Every year, as long as we have the money, we will be committing $25,000 to support the Skilled Trades Academy.”

Corey McCray, vice president for Workforce Solutions, said the money will allow TCC to train more students and expand its offerings in the skilled trades.

Megan Healy, Virginia’s chief workforce development advisor, stressed the importance of strengthening pathways to skilled trades jobs. “We need to do a better job of helping middle-schoolers and high-schoolers and wandering adults figure out what the great jobs are,” she said. 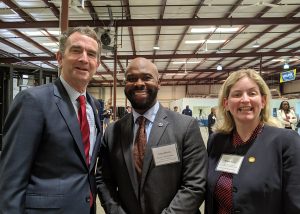 Increasing access to apprenticeships and providing more opportunity for online instruction will continue to be priorities of the Build Virginia campaign, she said.

For information about the Skilled Trades Academy, contact Stan Ashemore, program administrator, at sashemore@tcc.edu or 757-822-2116.