A Tweet from a student started a memorable day for the beloved TCC physics professor, whose passion for science made headlines in BuzzFeed, "Good Morning America" and Yahoo, to name a few 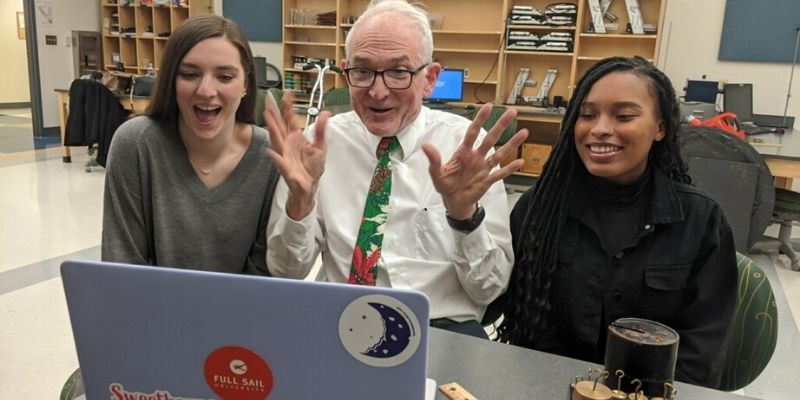 Tidewater Community College students have always known how special physics Professor David Wright is. Now the rest of the world knows, too.

Less than 24 hours after TCC student Erica Church shared a video montage on Twitter of the professor who thinks nothing of hopping on pogo sticks, lying flat on a bed of nails and walking barefoot over broken glass to demonstrate the laws of physics, the post went viral.

More than 25 million (and counting) have watched the 1:42 clip of Wright’s stunts that make his physics classrooms the opposite of boring (a million more tuned in on Instagram).

“I was expecting a few likes,” said Church, who initially shared the video in a group chat with her classmates. They encouraged her to put it on social media, but nobody expected what happened next.

Wright came to work in the Science Building on Thursday thinking it was just another day in his career that began 45 years ago at TCC. But by 11 a.m., Church’s Tweet had a million-plus views, and media requests for Wright began to swell.

What started with WTKR and The Virginian-Pilot expanded to Wright chatting with BuzzFeed, Good Morning America and NBC News. The “India Times” picked up the story. “The Kelly Clarkson Show” reached out and he talked with NPR Education in New York.

He had to give an exam at 5:45 p.m. (he also teaches astronomy), but fit in one final phone interview with a Yahoo reporter first.

Media requests continued to pile in the next day with People.com, CNN, BBC, 13NewsNow.com, WAVY-TV and many other publications from India to Italy.

“I’ve always thought students should be taught how science can be fun,” said Wright, whose interactive antics make him a “Rate-My-Professors” favorite among students from visiting universities, too. During TCC summer session, it’s not unusual to see multiple students from Old Dominion and James Madison University fulfilling their general education science requirement by taking Wright’s introductory physics class.

“Maybe this will encourage more physics professors to talk to students about more than equations in class,” he said.

The 69-year-old, a father of four and grandfather to seven, demonstrates Newton’s Laws of Motion by rolling a bowling bowl down the hallway and teaches convection by setting a blaze outside. He was named the college’s Professor of the Year in 2017.

“He clearly loves this subject,” Church said. “He loves to make it fun for us and it’s great to see someone who loves his job that way.”

Better hurry and register! Spring classes start on Jan. 13, and we know at least one science class that’s filling up!