Walking the stage is bittersweet after 17-year journey

Homelessness, family demands and cancer did not stop this grad from realizing her dream of a college degree. 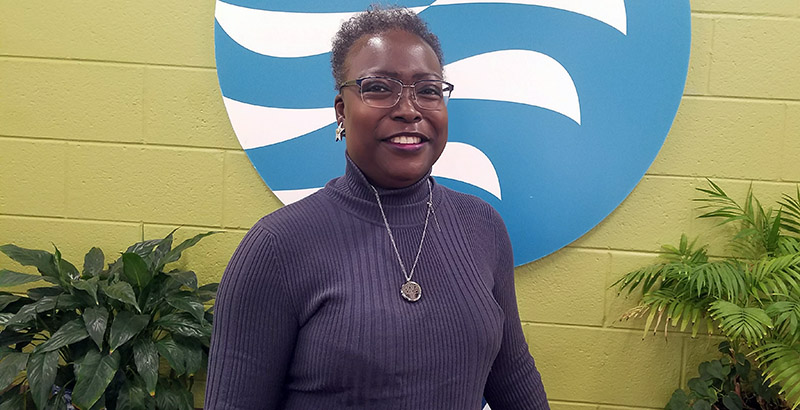 Three different types of cancer, homelessness and raising children, including four who aren’t her own, didn’t prevent Geneva Lawton from attaining a college degree.

It took 17 years, but more than two dozen friends and family will watch her cross the stage at Tidewater Community College’s 65th Commencement Exercises on Dec. 18 at the Ted Constant Convocation Center.

Lawton, 50, will graduate with an Associate of Science in General Studies. She plans to enroll at Norfolk State University to pursue a bachelor’s in social work.

“This is a dream! I had a rough upbringing and was told I wouldn’t amount to anything. I decided early on that I was going to get a degree and do something with my life,” Lawton said.

Lawton first enrolled at TCC in 2000, but was sidetracked by health issues and family demands.

Diagnosed with Stage IV breast cancer in her early 30s and now battling brain cancer, she said, “My body is basically a research study, as I’ve battled this disease for 17 years – everything from breast to bone cancer. I was told I could die anytime, and there was no hope, but I’m still here.”

Lawton’s winding TCC journey included support from the Open Door Project, a federal program offering free academic, career and cultural counseling to low-income, first-time college students. “They were very encouraging and supportive because of my situation,” Lawton said. “They were in awe of what I was doing and that really helped.”
Geneva Lawton in her own words

The family struggled financially and faced homelessness. They applied and received a Habitat for Humanity house and went to work building homes for others in need. When Lawton’s cancer kept her inside, the group gave her a job in the office and eventually provided a helping hand to home ownership.

“We’ve been in our home 14 years, but it immediately became a sanctuary for my family,” Lawton said. “I’m so proud of all of my kids and grateful to have been there when they needed me.”

All six have attempted college and her own children, Carolyn and Maxie, and niece Shanice hold degrees.

Lawton has had a front-row seat for watching TCC grow over almost two decades. “I love the new buildings and the student centers, but one thing that never changes is that the people are committed to seeing students succeed. You can feel them backing you,” she said.

Lawton holds a 3.5 GPA and is a member of Phi Theta Kappa, the honor society for two-year colleges. She discovered her love of math at TCC and credits staffer Kendra Brown with helping her succeed in college algebra. She also recognizes professors Azam Tabrizi, Jeffrey Stewart and Jimmy Peterson with providing extra support.

“I tell all of my kids that no matter what you go through, don’t give up,” she said. “Reach for your goals and see what you can do!”