Parents establish $10,000 endowed scholarship in memory of their son

Christopher Garrett’s parents established a scholarship to help a TCC student like him fulfill his dreams. This year’s recipient, Kayla Alesna, is an ideal selection. 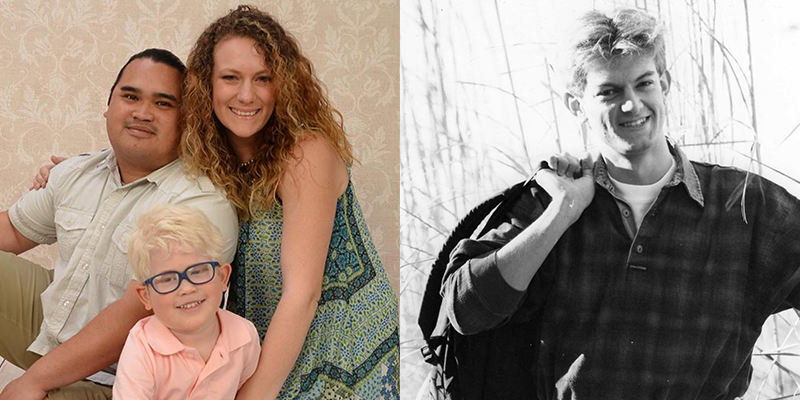 Christopher Garrett’s parents established a scholarship to help a Tidewater Community College student like him fulfill his dreams.

Chris was just 22 when he died in a single car accident on the way home from a friend’s house.

Chris was the Garretts’ first child – and second loss.

Stephen, their second son, died at the age of 3 from leukemia. Chris was his little brother’s match and bone marrow donor, a role he took to naturally. “Chris was a giving and selfless young man,” said his dad, Larry Garrett. “He made friends with everyone he met and never resented helping Stephen.”

Active in track and football in high school, Chris was also artistic. He dabbled in modeling and enjoyed acting in a local murder mystery group.

But Chris struggled academically. Diagnosed with a mental health condition, Chris saw his grades skip by senior year and, like most new graduates, he wasn’t sure what he wanted to study.

At TCC, he got back on track.

Enrolled full time in the general studies program, Chris was benefitting from the personal, caring attention he received from his professors. Small class sizes and dedicated instruction helped. His grades improved.

The Garretts, touched by all the counselors and professors who reached out after Chris’ death, established the Christopher M. Garrett Memorial Scholarship in his memory.

“My wife and I think TCC offers something larger schools don’t – individual attention. Community colleges are willing to give adult students opportunities. We wanted to help,” Larry Garrett said. “That’s what we had in mind, helping another student and keeping Chris’ memory alive.”

This year’s recipient, Kayla Alesna, is an ideal selection for Chris’ scholarship.

Alesna, who struggles with a seizure condition, never thought college was in her future, much less a degree in information systems technology with a focus on databases.

“School was so hard for me growing up,” she said. “In high school, I would try and try and try and only make D’s and E’s. I gave up and just got my GED. I never thought I’d be able to go any further than that in my education.”

Things changed when she married and her son, Onyx, was born with disabilities.

Watching his persistence was a wake-up call for her. “My son never lets anything get in his way,” she said. “I realized I couldn’t just say all this stuff to him about working hard and going to school. I needed to show him how to do it.”

Alesna describes herself as “petrified” her first day of school. But, like Chris, she found support from her professors and staffer Elisabeth Jakubowski in the Educational Accessibility Office.

Information technology was, to her delight, a natural fit – and she discovered a passion for coding and problem solving in the lab. “It was totally different from high school; I was never scared to ask for help – and my professors were always there to offer it,” she said.

She finished her first semester with straight A’s.

“I thought ‘How did this happen?’ ” she said. “I realized I wasn’t just going to scrape through college; I was going to be successful.”

Jakubowski encouraged Alesna to compete for scholarships to help cover the cost of her computer and printed study materials.

But it was some scary medical news that spurred her to complete the applications.

“This was all happening right when I went through a scare with my son possibly having leukemia,” Alesna said. “I figured ‘Now’s the time we need it most. I’m going to go for it.’ Not long after that my computer died and I thought, you know, ‘What am I going to do now?’”

She won the scholarship – and it felt like kismet.

When Alesna learned the Garretts had a son who had died of leukemia she was shocked: “I had chills.” She sees a lot of similarities between Chris and her – both adult learners who found a second chance at education at TCC.

Even though she won’t graduate until December, Alesna is already getting calls for job interviews. “People want me to work for them in government positions – really good jobs,” she said. “TCC has made all of that possible for me.”