“I really consider this a labor of love and my legacy for my country and my people.” – Gabriela Toletti 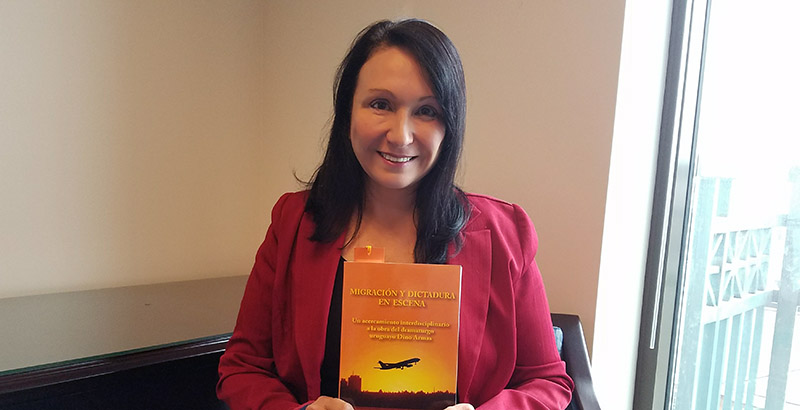 Gabriela Christie Toletti just completed a work of a lifetime.

She recently wrote and published in Spanish “On the Scene with Migration and Dictatorship: An Interdisciplinary Approach to the Work of Uruguayan Playwright Dino Armas.”

Toletti, a Tidewater Community College professor of Spanish and a native of Uruguay, says she wrote the book because the topic was close to her heart.

Armas is one of the most prolific Uruguayan playwrights, and his works have been staged in Latin America, the United States and Europe.

“I’m an immigrant myself, so I know the anguish of being away from my land,” she said. “I lived in Uruguay during the time of dictatorship, and after coming to the U.S., I disconnected from my country for a time.

“It was an amazing series of events that enabled me to reconnect with my country, my people and my friend and colleague Dino Armas.”

Toletti first met Armas in the mid-’90s when she received a scholarship to study theater in her home country. She discovered that much of his work revolved around the topics of migration and dictatorship.

“Dino gave me an insider’s view, allowing me to attend rehearsals and performances,” she said. “We quickly became friends.”

In December 2017, Toletti presented the book during a gala at the Cervantes Theater in Uruguay. The evening included remarks from Armas, as well as an artistic segment with actors portraying three iconic scenes from his plays, and a musical presentation with Tango dancing.

“I really consider this a labor of love and my legacy for my country and my people. This book is dedicated to those who migrated and couldn’t come back and for those who returned,” Toletti said.

The book is now being translated into English, and when complete, Toletti hopes to present it at the college’s Roper Performing Arts Center in a program similar to the one in Uruguay.

Toletti is now at work on a children’s book titled “Chorro the Dune Dog,” which is about her dog’s journey to the American dream. Toletti recalls fondly finding Chorro wandering alone on the dunes close to the ocean in Rocha, Uruguay. She and her husband, Chuck Christie, decided to adopt Chorro and had to get him a pet passport to come home with them. The book touches on the topics of migration, adoption, traveling and adapting to a new land and family.

Toletti teaches Spanish full time at the Norfolk Campus. She holds a doctorate in Latin American literature, and has credentials as a clinical psychologist and as a teacher of English as a second language.