From here, he designed a future, Muggle Dreams and all 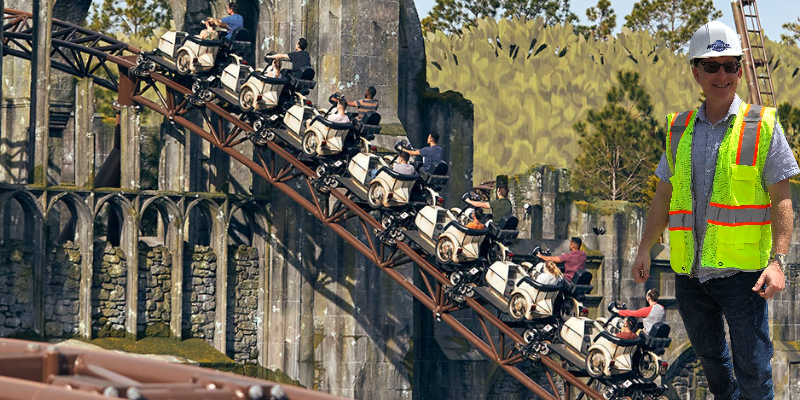 When 22-year-old Marc Steinberg showed up in Norfolk with only a duffel bag underneath his arm, he wasn’t exactly college material.

He spoke Hebrew more easily than English. Though born in New York, he grew up attending vocational school in Israel.

Hampton Roads appealed to him because he wanted to get to know his father, a Virginia Beach oncologist. He also had a strong desire to pursue higher education. Earning his GED at an adult learning center enabled Steinberg to enroll at Tidewater Community College, admitting, “It wasn’t easy in the beginning.”

Back then, he couldn’t have envisioned that an associate degree would pave his path to the University of Virginia and MIT let alone jobs in Hollywood and on the design team for Universal’s latest Epic Universe theme park in Orlando.

“TCC gave me the tools to start my career,” said Steinberg, who spent three years in military service in Israel. “I was very motivated, and it helps if you’re motivated. TCC gives you the tools to advance yourself. If I had applied to UVA right away, I wouldn’t have gotten in. I needed to be with good people to learn and grow. TCC was that steppingstone.”

His early mentors came from the math lab on the Virginia Beach Campus.

“So many times, I didn’t know what I was doing,” he said. “I literally lived there. I did all my homework in all my courses in the math lab and made lots of good friends.”

Steinberg graduated with an Associate of Science in Science and was accepted into the University of Virginia, planning a pre-med route.  One organic chemistry class later, he realized medicine wasn’t for him. Becoming an architect was something of a childhood dream, so he switched majors to pre-architecture, studio art and Middle Eastern Studies.

After graduation, he applied to architecture schools. Delighted to be accepted into the University of Pennsylvania, he had just returned home from putting a deposit down there, when he saw a letter waiting in his mailbox.

It was an acceptance into MIT’s Masters of Architecture program. The Ivy League university in Boston is home to the top architecture school globally, according to QS World University rankings.

“It was very inspiring to be surrounded by the best in the world,” said Steinberg, lucky enough to be part of a studio class taught by Frank Gehry, whose designs include the Guggenheim Museum. “There was a lottery to get into that studio lab, and I got in,” he said.

After starting out at a firm in Harvard Square, an MIT friend connected him with Sony Pictures Imageworks in Los Angeles.

“I interviewed and Sony hired me the same day,” Steinberg said.

He never considered leaving the West Coast until the opportunity at Universal arose. His first task was what Muggle Dreams are made of: the Hagrid’s Magical Creatures Motorbike Adventure Harry Potter rollercoaster.

“I worked on that for a year and a half,” Steinberg said. “I did all the animation, all the modeling and 3D support.  I had the opportunity to combine my film experience with my architectural education and training.”

COVID-19 has put his career on hold for now. A recent trip back to Hampton Roads to visit his dad made him reflect on his TCC experience. He repeats this often when offering advice. “Put yourself with good people and you’re going to be one of them and inspire others.”