From a TCC commercial to Juris Doctor

With a 4.5 GPA at Hickory High, Elissa Sanford could have gone anywhere for college but chose TCC. Today she's a lawyer in Northern Virginia. 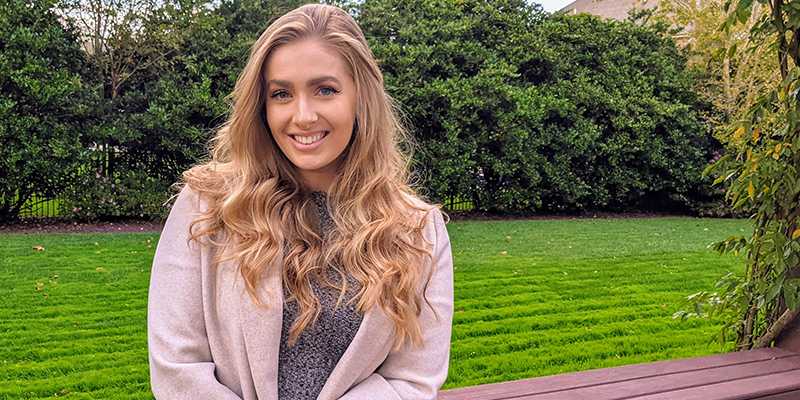 Whatever happened to the girl in the Tidewater Community College commercial?

Chances are you’ve seen the TV spot that first aired in 2016 featuring Elissa Sanford, whose 4.5 high school GPA and AP credits would have stacked up for admission to just about any college.

But the Hickory High graduate chose TCC, where she graduated with an Associate of Science in Science and no student debt. She transferred to Old Dominion for a bachelor’s in biology.

As the 30-second ad trails off, Sanford talks about her next step — medical school.

Four years later, Sanford’s no MD. She’s a JD, instead, earning a Juris Doctor degree from the William and Mary Law School in May. Today the 26-year-old is a junior associate at Oblon, McClelland, Maier & Neustadt, headquartered in Alexandria. The firm, located across the street from the U.S. Patent and Trademark Office, is among the largest in the nation that focuses exclusively on intellectual property.

Sanford couldn’t be happier about the journey that started “from here.”

As a high school senior, her friends prodded her to go away to college, but when she did the math, it didn’t add up. Instead, Sanford finished all of her general education requirements at TCC, so she could begin ODU as a junior. As a recipient of the Outstanding High School Graduate Scholarship, she attended tuition-free.

“Ultimately, I had to make the decision for myself, which is something you have to learn how to do,” she says. “I realized there was no point in going away because I really didn’t know what I wanted to do. And I didn’t see the point in wasting all that money while I tried to figure it out.”

As a student ambassador for the Chesapeake Campus, Sanford enjoyed the service aspect. She was a mentor to high school seniors, who she sometimes saw herself in. “Just being able to sit down with someone who was frustrated and helping them out was really rewarding,” she says.

More than the small class size at TCC appealed to her. She felt that the professors invested in her, particularly her human anatomy and physiology professor, who helped her find a direction. For a while, that appeared to be medicine.

“I had always done well in the sciences, so the medical school route was recommended,” she says, and it almost happened.

But shortly after graduating from ODU, she was less than enthusiastic about actually working in a medical setting.

But how things work — now that intrigued Sanford, who decided law school offered a better fit. She compares the problem-solving elements of patent law to piecing together a puzzle. The science to the process fascinates that part of her that once wanted to be a brain surgeon.

“You have to be able to sit down and look at an invention and figure out how it works,” she said.

Sanford interned for her current firm the summer prior to her final year in law school. By summer’s end, she had an offer — a commitment the firm kept despite the COVID-19 pandemic.

Working remotely is a challenge at times, but Sanford applies those same study skills she learned at TCC to practicing patent law.

“The habits you develop early carry on, and I learned a lot of my study skills and time management skills at TCC,” she says.  “I love my job and I am grateful to have found such a stimulating and rewarding career. It all started at TCC.”