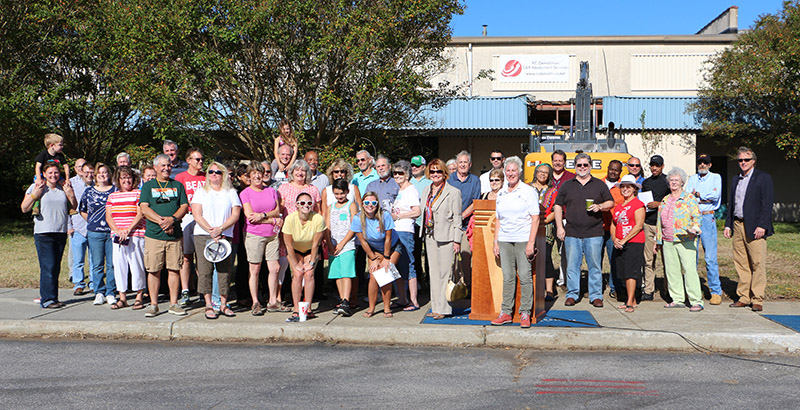 Wearing brick red Timberlands and a white hard hat, President Edna V. Baehre-Kolovani climbed aboard an excavator and knocked out a chunk of the Beazley Building on Tidewater Community College’s founding campus – the first step in a bittersweet demolition that will make way for new development.

What will always remain, though, are the memories of a building that served as both an academic and community center from the college’s founding in 1968 until 2010, when a new Portsmouth Campus opened in that city.

Former and current TCC employees, Frederick College alumni and community members gathered for a ceremony on Oct. 7 to remember the campus that hosted a range of activities, including the “Raunch & Roll Festival” in May 1973 and poet Nikki Giovanni in 1990.

“Alumna Carole Maguire said she gained the confidence to become a writer in her classes here,” President Kolovani said. “Peter Shaw, a TCC alumnus and now a business professor, was active in the student government association. Rich McCormick developed an enduring relationship with one of his professors, Phil Black, and remembers TCC as one of the greatest experiences of his life.”

Doris Jordan, who earned a certificate in clerk typing in the ’70s, drove over to attend the gathering from Newport News to reminisce about her experiences at the campus where both her parents worked.

“I enjoyed it here; I enjoyed everything about it,” she said. “I was fresh out of high school. I latched onto so many people here who became mentors. You never know who you’re going to meet in your travels and I met some of the best people here.”

Dorcas Helfant-Browning, chair of the TCC Real Estate Foundation Board, also spoke at the morning event about the future of the property, which sits at the confluence of the James and Nansemond rivers.

“Today we’re standing on a gem and a jewel,” said Helfant-Browning, who took her first real estate appraisal class at the Beazley Building. “You love TCC as much as I do. You are its history and foundation.”

The city of Suffolk and the Real Estate Foundation will partner to decide the best use of the property, which was donated by Fred Beazley and the Beazley Foundation in1967, laying the foundation for the first community college in South Hampton Roads.