“I would not be where I am today without TCC,” said grant recipient Richard Buddemeier, a Navy vet now driving for Southeast Connections. 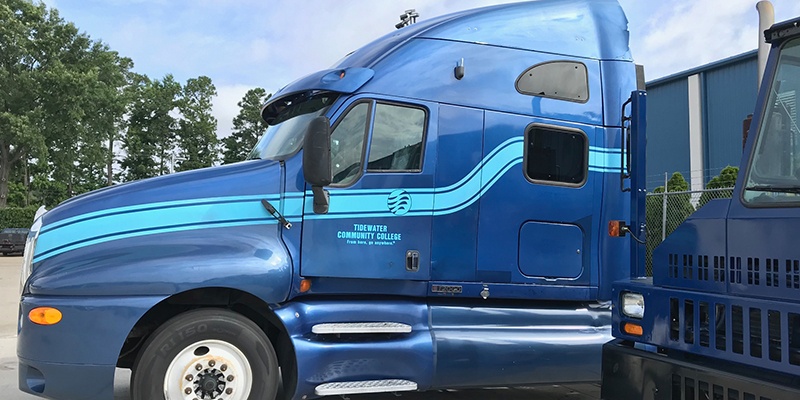 Tidewater Community College received a fifth federal grant to help train military veterans and their spouses for careers in trucking.

The U.S. Department of Transportation Federal Motor Carrier Safety Administration (FMCSA) recently awarded TCC an $88,435 grant, which will be administered by the college’s Center for Military and Veterans Education (CMVE).

“This grant has had a transformative effect on the lives of so many veterans and their families, while also addressing a dire need for licensed truck drivers in Hampton Roads,” said Batanya Gipson, interim executive director of the CMVE. “We are excited to have the ability to connect even more military-related students with this opportunity.”

Navy veteran Richard Buddemeier earned his Career Studies Certificate in Truck Driving from TCC on a Friday in fall of 2016 and started training on his new job that Saturday. For the last two years, he’s driven for Southeast Connections. Thanks to the grant, he paid TCC no tuition to complete his certificate.

“I would not be where I am today without TCC,” he said. “The program is so in-depth, so easy to comprehend. The hands-on training was extremely helpful. The book learning was very important. What I learned made me the driver I am today.”

The FMCSA grant program aims to expand the number of truck drivers nationally by assisting active-duty, veterans, transitioning military and Department of Homeland Security members and their spouses to earn to a Commercial Driver’s License. TCC is one of 16 educational institutions that received funds from the $2 million federal grant to help train veterans for jobs as commercial bus and truck drivers.

Since TCC received its first grant in 2015, 183 veterans and spouses have enrolled in the program. Recipients of the grant pay nothing to complete the one-semester, 16-credit certificate. Classes are taught at the Center for Workforce Solutions on College Drive in northern Suffolk.

Contact Alesia Wroten, CMVE program coordinator, at awroten@tcc.edu or 757-822-7714, for information on qualifying for the grant program.