Father and dual-enrolled daughter graduate together

“As parents we want a better start for our kids. To see SaNayah graduate with a certificate at 17, I’m really proud." -- Marvin Fletcher, TCC graduate 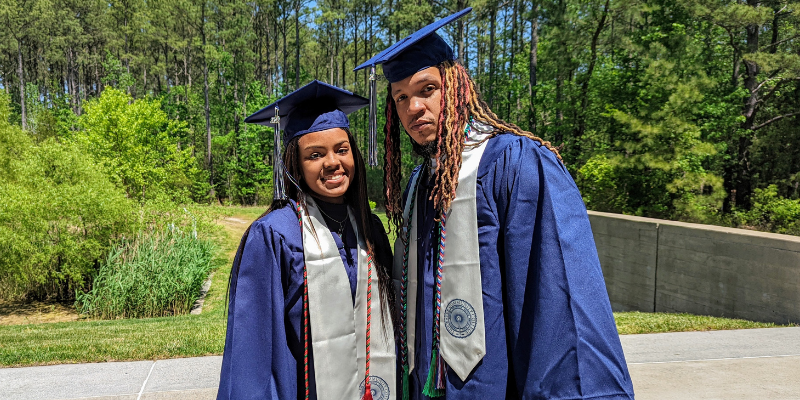 Marvin Fletcher and his daughter SaNayah Hill were surprised to find out they are graduating from Tidewater Community College at the same time.

“I never thought my daughter and I would be wearing a cap and gown together. I’m utterly speechless,” Marvin said.

SaNayah added, “I feel like it will be a fun experience and not something a lot of people can say.”

Marvin’s degree has been a decade in the making. He is earning an Associate of Applied Science in Management. SaNayah, a junior at Deep Creek High School, is a dual-enrollment student earning a Career Studies Certificate in Emergency Medical Service/Emergency Medical Training.

“As parents, we want a better start for our kids,” Marvin added. “To see SaNayah graduate with a certificate at 17, I’m really proud. A lot of kids don’t aspire to do all that.”

A military veteran, Marvin served in both the United States Marine Corps and the Army. He spent 12 years doing transportation and logistics, with overseas tours in Afghanistan and Kuwait. “Serving in the military slowed down my studies as I moved around the country and did multiple deployments,” Marvin said.

Marvin credits TCC veterans’ advisor Howard Darden for helping make his graduation possible. “I needed my official transcript from the military so I would get credit for my PE class, and he made that happen.”

He added, “The help I received from the start from TCC’s military center has been monumental to my success and has everything to do with where I am now.”

A native of Portsmouth, Marvin remembers his family living paycheck to paycheck. “My sister Sonya and I would go outside and cut wood, so we’d have a fire in the stove and heat in the house. We had a very humble childhood,” he added.

Marvin also remembers failing at least two classes every year since sixth grade and having no one invested in his education. He attended summer school annually to pass each class and graduated from I.C. Norcom High School.

SaNayah decided to pursue the EMT certificate because of her interest in medicine. She hopes to one day be a general practice physician.

SaNayah’s program included ride-alongs with area firefighters, something she called “intense,” but worth it. “I craved the experience and wanted to get out there and do it,” she said. “People often doubt themselves. But I say get out there and do the work and see what doors will open.”

Marvin added that he found a good fit at TCC. “I liked the teachers and the challenge of it all,” he said. “I enjoyed in-person classes then being able to go to faculty and staff and get the help I needed.”

Marvin plans to use his degree to open and manage group homes for disabled adults and veterans with Post Traumatic Stress Disorder, something he suffers from as well. He says that it’s a confidence booster earning this degree and a motivator to continue to serve.

“Life isn’t about where you start, but where you finish,” Marvin said. “There were times when I thought I couldn’t do it, but the staff at TCC motivated me and my family support systems made all the difference.”