All proceeds from the project will be used to further the foundation’s mission of supporting TCC’s academic programs and ongoing operations. 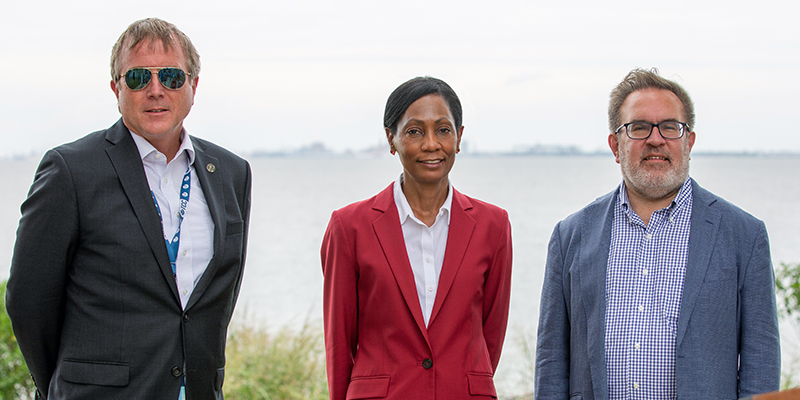 Tidewater Community College Real Estate Foundation’s waterfront property in northern Suffolk received a visit from the Environmental Protection Agency’s Andrew Wheeler on Monday. The EPA Administrator commended the successful cleanup and revitalization of the former Superfund site set to be transformed into one of the most vibrant  new communities in Hampton Roads.

Two years ago, the Real Estate Foundation announced plans to redevelop the land, which served as TCC’s initial Portsmouth Campus after being gifted to the college by the Beazley Foundation in 1968. The long-term vision calls for a dynamic mixed-use space, which will include multi-family housing, dining options, commercial, educational and retail shopping.

All proceeds from the redevelopment, commonly referred to as College Point, will be used to further the foundation’s mission of supporting  TCC’s academic programs and ongoing operations.

“This is going to secure the future of the college for years to come — having the revenue generated by this former site,” said Wheeler, who toured the 975-acre tract, a former Army munitions depot built in 1917 at the mouths of the Nansemond and James rivers.

Contaminants and munitions had to be eliminated from the former Nansemond Ordnance Depot, among the Superfund sites on the federal National Priorities List. EPA spearheaded the collaborative effort with the TCC Real Estate Foundation, the Army Corps of Engineers, the City of Suffolk Economic Development Authority, the Virginia Department of Environmental Quality and the Restoration Advisory Board in the effort.

Cleanup remains ongoing on the site that sits west of Interstate 664 and south of the James River.

Wheeler lauded the progress as being the model for future EPA revitalization efforts. More than 6,200 munitions and 200,000 pounds of munitions debris have been removed to make the site safe for reuse.

“I thank Administrator Wheeler for taking the time to visit today and appreciate the collaborative effort put forth by our regional partners to achieve this milestone,” said TCC President Marcia Conston. “The project promises to be a tremendous asset for the TCC family and the community. We are very proud to be part of such a significant regional enterprise.”

The Real Estate Foundation was created in 2005 with the mission to position it as an economic engine for perpetuity to feed proceeds back to the college. “That’s why we go to work,” said Matthew Baumgarten, the foundation’s executive director “It’s for the students. That’s our mission. The foundation supports the mission of the college.”

“We’re going to build something that no one has ever seen,” he added. “A new live-work-play-learn community. It will be the first of its kind.”