What’s the coolest video game on Earth? Helping to save a life 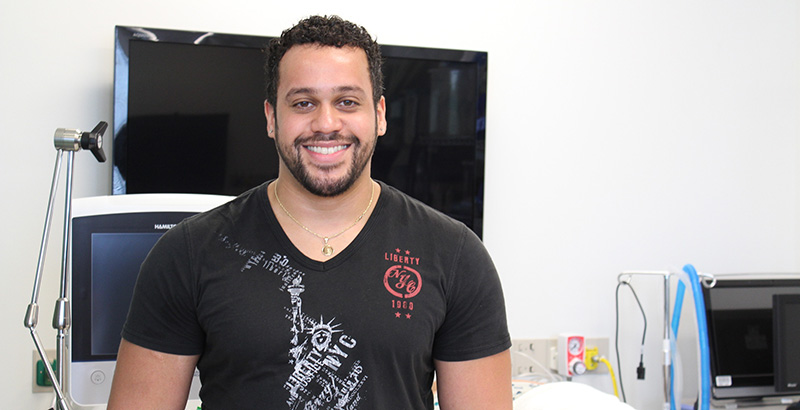 “There is no better feeling in the world,” said Velazquez, 31, who will graduate with an Associate of Applied Science in Respiratory Therapy next spring.

“It was a delicate procedure,” said Velazquez, who previously completed clinical rotations at Chesapeake Regional Medical Center and Lake Taylor Transitional Care Hospital (TCC also has partnerships with Sentara Norfolk General and Sentara Virginia Beach). “It was an opportunity that fell in my lap, and I just took it.”

Generally, Velazquez takes part in rounds doing ventilator checks. Harvesting the lung for transplant required him to learn the LifeNet protocol, a six-hour procedure in this case.

Lungs are harvested from only 15 percent of all cadaveric donors, making them among the least harvested organs. Lungs are vulnerable to a plethora of potential complications related to the failure to maintain certain oxygen levels, a challenge Velazquez was fully aware of.

But hour after hour, he followed the protocol maintaining patience throughout.

“One missed step and you can’t use the lung,” said Velazquez, who assisted the pulmonologist during the process with a bronchoscopy. That required using a camera to view the bronchial tubes so that all the excess fluid could be suctioned from the lungs.

“It was like the coolest video game on Earth,” Velazquez said.

“He was a great help in our Medical Intensive Care Unit. He was an active participant in assisting in the conditioning of one our LifeNet patient’s lungs. The peep recruitment maneuvers as well as assisting with the bronchoscopy and ventilator management made a great difference. The lungs were viable the next day and we were able to give this gift to a patient in need. Thank you for sending us such a wonderful student.”

Humbled by the experience, Velazquez is grateful he made an impact, reassurance that he chose the right field. He enjoys the critical thinking role that a respiratory therapist plays as part of the larger medical team.

“When I started, I thought we only did breathing treatments, but with respiratory therapy, you can go anywhere in the hospital with our skill set,” he said. “It’s bittersweet because we lost a life, but we also saved a life, and that’s the best feeling ever.”

Interested in TCC’s respiratory therapy program? Attend a mandatory information session, which is held the third Thursday of each month at 4 p.m. (except December) at the Regional Health Professions Center on the Virginia Beach Campus.

In addition to applying to TCC, complete and submit the Health Professions Program Application by Jan. 15 for summer admission. Include unofficial transcripts from previous colleges you have attended.

For more information on applying for the program, contact Bieszczad at dbieszczad@tcc.edu or 757-822-7412.