Daniel DeStefano, who graduated with an Associate of Applied Science in Emergency Medical Services, is a flight paramedic for VCU LifeEvac. 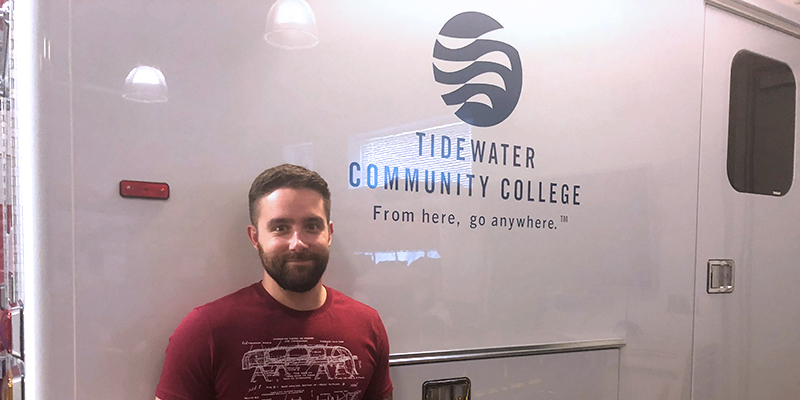 From here, Daniel DeStefano has soared.

The Smithfield native earned Tidewater Community College’s Associate of Applied Science in Emergency Medical Services (EMS) in 2005, and today he is a flight paramedic working for VCU LifeEvac in Richmond. The helicopter that doubles as his office has all the same capabilities of an intensive care unit, a necessity to transport patients often in the direst circumstances.

“I love my job,” said DeStefano, who has also taught EMS classes at the college. “A lot of people don’t realize the decisions paramedics have to make. In a hospital setting, you have doctors, nurses and lots of oversight. In EMS, we have resources we can utilize, but largely it’s you managing all aspects of patient care.”

DeStefano considered a career in forensic science – “Then I took a chemistry class and that was the end of that,” he laughed.

He gravitated toward becoming an EMT after joining his local rescue squad, where he combined his interests in the health profession with helping his community. He was just 20 when he graduated from TCC, initially working for fire departments in Yorktown and Suffolk.

The dream of flight medic was always an aspiration.

“Who wouldn’t want to fly?” he asked. 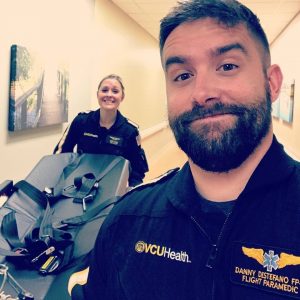 Five years of experience in critical care is required prior to completing the rigorous application process that led to DeStefano being hired by VCU. These days he works one 24-hour shift and one 12-hour shift weekly, a flexible lifestyle that makes room for him to pile his beagle Gus and lab Abby in his Jeep and head for the outdoors during his leisure time.

On the job, he travels with just a pilot and flight nurse, typically 30-minute trips where every second counts.

While flight medics are called to the scene of accidents and other traumas, DeStefano said most of his work involves transporting patients from one facility to the next, a rural location to a more metropolitan one, for example. Teamwork is a vital part of the equation.

Much of his role is ensuring that calm, clear thinking prevails in the most chaotic of situations.

“It’s not just the flight crew; it’s the ambulance, hospital – every person in that patient’s care right down to the person cleaning the room is really important to that patient’s outcome,” he said. “Managing logistics is a big part of what I do.”

Communication skills are essential to anyone wanting to work in pre-hospital medicine, he said. “You have to be able to talk to people when you’re frustrated, mad, upset. You might even have a patient and not approve of them or their views, but that’s your patient and your job is to give them the best possible care.”

He is also in nursing school at Rappahannock Community College and concurrently working toward his bachelor’s in nursing at Old Dominion. He graduates from both in May; the additional education will make him eligible to be a flight nurse.

He’s appreciative of the foundation he received as a graduate of TCC’s EMS program, which he stressed isn’t easy. Given the demands of the profession, he’s glad it wasn’t.

“If you have the determination and the background and you put your time into it, it’s absolutely doable,” he said. “If you’re doing it just for a pay raise, I don’t advise it.