Giving the gift of Chrome 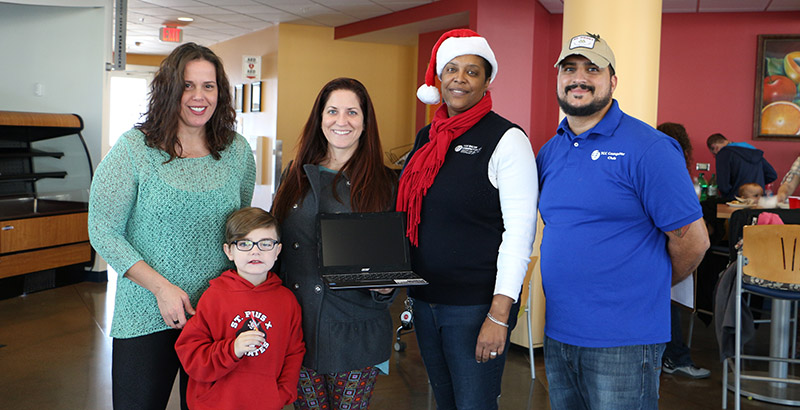 Johvanny Torres knows firsthand what it’s like to be a single parent struggling to balance classes and kids. So the Marine Corps veteran and president of Tidewater Community College’s Computers for Student Success program had an inspired idea.

Give the gift of Chrome. Or rather Chromebooks to a deserving student population.

He got plenty of buy-in from TCC’s Center for Military and Veterans Education and the college’s computer club, which awarded 55 refurbished Chromebooks in holiday gift boxes to military-related students and single mothers.

“After caring for my son when he was sick while studying for midterms, I gained a new perspective of how hard it is to manage a job, go to school and take care of kids,” he said. “The experience led me to bring this idea to the computer club. We voted on it and everyone was more than willing to donate the Chromebooks to single mothers at TCC.”

The recipients of the Chromebooks had to be taking courses at TCC full time. They were selected through a need-based application process; many were nominated by professors and classmates. Nansemond-Suffolk Academy donated the computers.

“The reactions from the recipients have been very emotional,” said Carla Bell-Thompson, project coordinator at TCC’s Center for Military and Veterans Education. “It’s so fulfilling and touching to give single mothers and military-related students these gifts. Being part of the TCC family, we know that a major part of our motto is giving to and supporting our students.”

Stacey Ennabe, who is pursuing a Certificate in Welding at TCC’s Portsmouth Campus, said the gift will allow her to spend more time with her children.

“It will make it a lot easier to get smaller assignments done. I won’t have to take extra time to go to the library while my kids are home,” she said.

Nikki Thornton, a mother of two pursuing a Career Studies Certificate in Cyber Security, said the Chromebook will help tremendously with her on-the-go schedule.

“This gift is really going to help me complete my work when I’m not at home – especially when I’m at after-school activities for my kids,” Thornton said.

For Joanne Madinger, the Chromebook giveaway couldn’t have come at a better time for her and her family.

“My children and I have lost quite a bit,” Madinger said. “We had to downsize from a four-bedroom, two full-size bathroom house to a two-bedroom apartment, which is about 450 square feet. It’s been really tough for them. This gift will help out considerably.”

Since its inception in 2009, Computers for Student Success has provided more than 10,000 computers to deserving students and nonprofit organizations. Program volunteers repair close to 1,500 computers per year at club headquarters on the Virginia Beach Campus.

“All year long, we give computers to people who need them,” said Gary Noah, professor of information systems technology and club advisor. “Every day, we have the chance to really help someone in need. But to be able to provide computers to single mothers around the holidays really gives you a great feeling.”