Computers for Student Success – a win-win for students 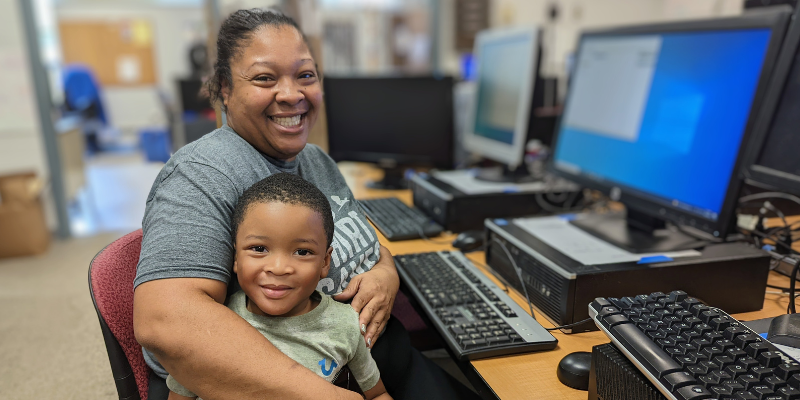 Tidewater Community College student Daniele Sparks is ready for classes to start next month. This week, she visited Computers for Student Success and picked up a newly refurbished personal computer at no cost.

“I always told myself that I’d go back to school when my son started pre-school,” she said. “The time is now, but with everything getting so expensive, I can’t afford to buy a computer. This is a real gift.”

Computers for Student Success is run by TCC’s Computer Club and Professor Gary Noah. It launched in 2009 and has distributed close to 15,000 computers since the start.

“When we provide computers for students in need, they are very appreciative. I gave the first 150 computers away myself. I’ve seen a lot of thankful tears,” Noah said.

He continued, “To a single parent who has no computer, getting one can mean the difference between success and failure. Students can’t make it to the computer lab or library because of work and childcare needs. Sometimes they don’t have cars. We’re getting rid a barrier for them.”

Computers for Student Success is wholly supported by donations from individuals and the community  including Sentara Healthcare and Stihl Co.

TCC’s Computer Club members rehabilitate and update the older or in-need of repairing PCs and laptops and get them into the hands of students, families and nonprofits in Hampton Roads.

“I’m so grateful for my new laptop. Without it, I’d have to drop my summer classes,” said Jolina Santiago, a TCC student who recently lost her car and home.

Computers for Student Success is taking applications now for Fall Semester. TCC students are encouraged to request a PC or laptop early as fall is the busiest time for the volunteer team. To start the process, use this form.

In addition to its service to the community, the club provides valuable hands-on experience to Computer Club members, many of whom are working toward Computer Science, Information Systems Technology or Cyber Security degrees at the college.

“This is a great way to serve our community while gaining experience repairing computers and working as a team,” said Lee Grimm, who helps Professor Noah run the program.

Although Computers for Student Success volunteers are mostly IT students, anyone is welcome to join the volunteer team.

“I like computers and diagnosing problems,” said Salvador Trinidad, a TCC student volunteer in business management. “My favorite part is helping students learn to use their new computers. My goal is to make it really user-friendly with no jargon.”

Noah added, “We’ve had some students who received a computer come back to volunteer and pay it forward for another student in need. We have stacks of computers to work on and everyone is welcome.”

More than 120 volunteers work with Computers for Student Success which is open Monday – Friday from noon to 5 p.m. The eight-room office is located in the Lynnhaven building, room E108, on the Virginia Beach Campus.

“We know the work we’re doing is changing lives. That’s why we are here 51 weeks of the year,” Noah said, standing in front of a wall of computers and thank you notes from grateful students.

For more information about Computers for Student Success, contact Noah at gnoah@tcc.edu.