“You come in with these expectations that engineering is going to be really difficult, and it is. But it is also manageable with the support of faculty.” -- Jared Cochran 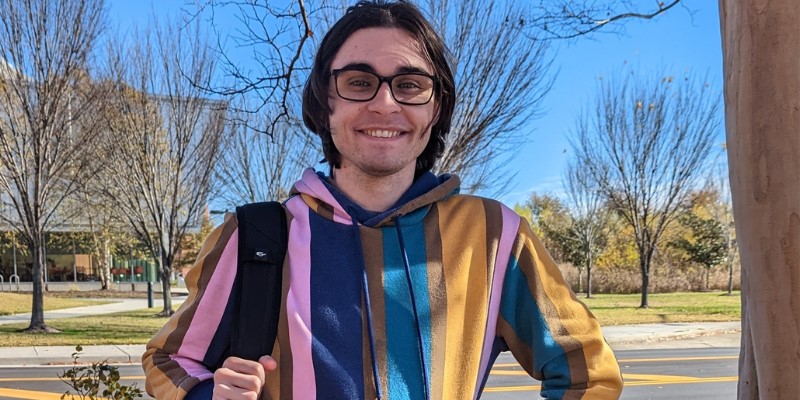 Jared Cochran has always been interested in science and technology. In fact, in his free time growing up he built computers with his dad.

He got his start at Tidewater Community College as a dual-enrollment student taking general education courses in English and pre-calculus.

“As a homeschool student, I had a lot of freedom to explore different areas and satisfy my curiosity,” Jared said. “I took college courses early, as well as watched science and math educators in my spare time.”

When Jared, 21, started full-time at TCC after high school, he found the move to college to be seamless.

“It was a smooth transition and I’ve gotten a lot of help from faculty who’ve acted as advisors and kept me on track,” he said.

He also realized he could use his computer experience to build a career. “It was eye-opening when I realized I could take that hobby and find valuable work in a field I really enjoy,” he said.

This December, Jared is earning an Associate of Science in Engineering with a 3.8 GPA. He is one of more than 1,350 graduates earning degrees or certificates next week.

“You come in with these expectations that engineering is going to be really difficult, and it is,” he added. “But it is also manageable with the support of faculty.”

Jared says Professors Paul Gordy and Kenneth Grimes have been a big part of his journey. “They recommended me for internships and were always there to help. They also shared their knowledge and real-world experiences in our classes,” he said.

The Portsmouth resident also found the college’s engineering resources to be state-of-the-art.

“Everything in the program really comes together and makes so much sense,” Jared said “And the tools in the labs are very high quality. We have a giant cabinet full of circuits, capacitors, inductors and so many other tools to complete our lab work.”

While at TCC Jared completed two highly competitive internships. The first was with Old Dominion University Modeling, Analysis and Simulation Center. The second was with ODU in a research program for undergraduates.

Jared plans to continue at ODU for a bachelor’s in computer engineering. He would one day like to work as a hardware engineer and has his eye on larger companies like Intel Corp.

“Anyone can do this with work with persistence and a little stubborn streak,” he said.

“Engineering is all about trial and error and getting up to do it again.”