She came to TCC without a plan but will leave with an associate degree, a full-time job and no student debt

“I’m the first in my generation to graduate college,” said Christine Dela Cruz, already working at Sentara Virginia Beach General. “You could say my dad is pretty proud.” 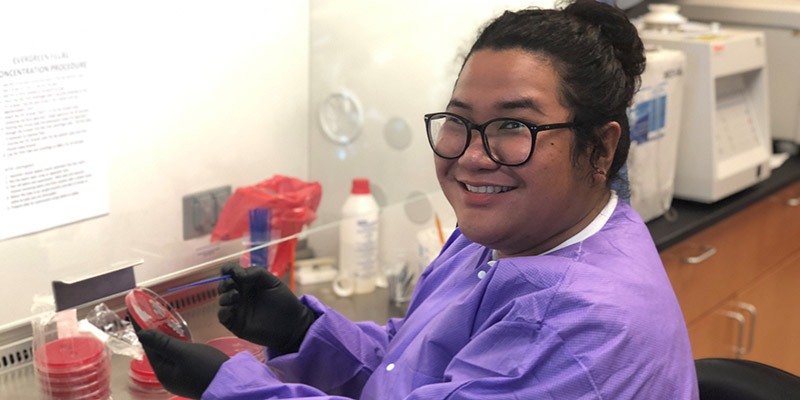 May 10, 2018 | Vicki L. Friedman, vfriedman@tcc.edu
Dela Cruz plans to work toward her bachelor’s in medical technology at ODU.

When Christine Dela Cruz immigrated to this country five years ago from the Philippines to join her father in Virginia Beach, she didn’t know what was next.

Word-of-mouth led her to Tidewater Community College, and with the help of academic advising on the Virginia Beach Campus, she discovered a career path she had never considered.

Dela Cruz will graduate this week with an Associate of Applied Science in Medical Laboratory Technology (MLT). She’s already been hired at Sentara Virginia Beach General as a lab technician. She has no student loan debt thanks to two scholarships she received from TCC in addition to her financial aid.

You can bet she’ll be savoring all of it during commencement on May 12 at 2 p.m., at the Ted Constant Convocation Center.

“I’m the first in my generation to graduate college,” Dela Cruz said. “You could say my dad is pretty proud.” 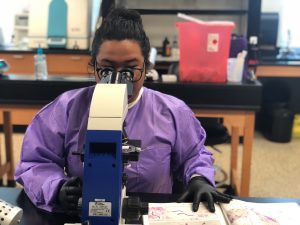 Christine Dela Cruz is the first in her family to graduate from college.

Dela Cruz, 24, considered nursing, but her fascination working with machines and preference to work indirectly with patients made her a better fit for working in a lab. Rapid job growth is projected for the medical laboratory technology field, where technicians assist physicians in the diagnosis and treatment of disease by performing tests on tissue, blood and other body fluids.

It’s an ideal match for a lab rat like Dela Cruz.

“Mycobacteria look like galaxies under a microscope,” she said. “There’s so many awesome things to see. It’s fascinating how minute organisms have a gigantic effect on the body. I also like working behind the scenes and solving the unknown organisms we had in microbiology. I felt like I was an investigator on ‘CSI.’ ”

Dela Cruz stresses that MLT is a rigorous program, particularly given that the Philippine dialect Tagalog is her native language. She also worked full time initially, enduring 12-hour shifts starting at 5 a.m., then napping in her car before heading to class. Professor Angela Bell is demanding of her students, Dela Cruz said, but also supportive and mentoring.

“Always, always, always she’s available,” she said. “All of the professors help you all the way through and they keep pushing you. They help you. That’s what I really like about the program. They don’t leave you hanging.”

Once Dela Cruz started the clinical portion of the program, she realized why the demands were necessary. She felt completely prepared for her three clinical rotations, where, she said, expectations are high.

“We compete with universities and other colleges, but all I’ve heard from my rotations is how TCC students excel,” she said.

Dela Cruz is also grateful for TCC awarding her the Alexsandria Manrov Scholarship, given on behalf of the late science professor, and the Barnes & Noble Scholarship.

“TCC helped out my family big time,” she said.

The MLT program boasts a pass rate of 100 percent the last three years on the state board exam that Dela Cruz feels well prepared to take in June. Bell also said 100 percent of those students have found employment in the field. Dela Cruz is actually among a selected few who is paid for her work during clinicals.

“She is such a hard worker,” Bell said. “She’s one of those students who’s all about helping others. In lab if anyone is having difficulty, she jumps in and tries to explain.”

Dela Cruz plans to work toward her bachelor’s in medical technology, an online program she can complete at Old Dominion University. She would eventually like to become a pathologist.