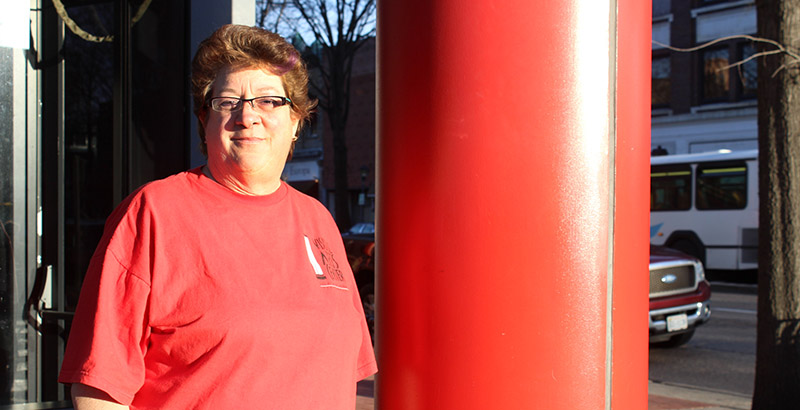 Alumna and professor Christine Chzasz loves Tidewater Community College’s Visual Arts Center (VAC) so much, she wears it on her sleeve.

Or rather, her ankle.

Her right ankle is adorned with a red column and the letters “VAC.”

“I’m a walking billboard,” she quips.

Chzasz describes herself as someone going nowhere fast as a single parent after a divorce. That was before she walked into TCC and talked with Christine Damrose-Mahlman, who today is associate vice president for student success. Back then she was an academic advisor, and noting Chzasz’s passion for art, asked if she had ever considered the VAC.

Soon enough she was outside the doors of 340 High St., nervous about stepping inside. She watched from a nearby park bench while students came and went, many toting impressive portfolios.

“I didn’t know if I was good enough to do this, but I went in there and an amazing thing happened,” she said. “There were people everywhere who had the same interests as me. The faculty was one million percent amazing. You almost have one-on-one here. All the instructors care passionately about the students. That’s what makes this place marvelous.”

Now in addition to teaching pre-kindergarten full time for Norfolk Public Schools, Chzasz instructs nighttime and weekend classes at the VAC. She’s taught Drawing I, II and IV and Fundamentals of Design.

Her classroom style feeds off what she learned as a student at the VAC studying under faculty that includes Corinne Lilyard-Mitchell, Rob Hawkes and Pamela Barcita. She jokes with her class regularly and encourages her students to be open-minded.

As an artist, Chzasz prefers sculpture and painting the most. Most of her artwork focuses on her thesis about the depletion of the Native American culture. Among her favorite pieces is a work she created as a student on raw canvas. She painted the 7-foot piece upstairs in the VAC using both hands and feet.

Fitting for the woman who says, “I eat, sleep and breathe this place.”