“TCC got me where I wanted to be”

Chad Oxton's associate in civil engineering technology earned him a job and three promotions with the City of Suffolk. He also teaches on the Virginia Beach Campus. 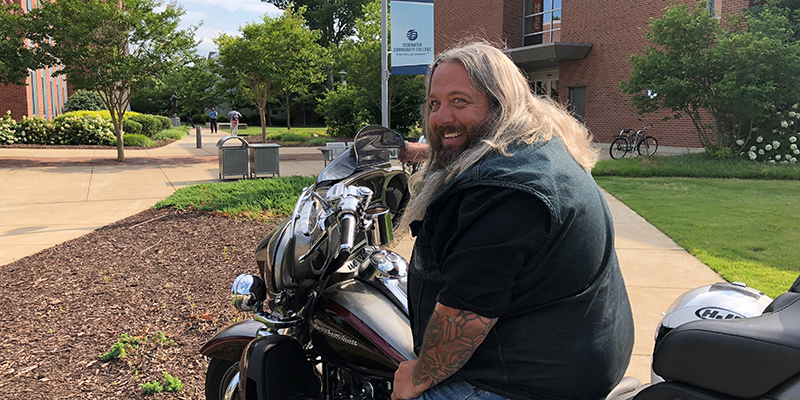 On Dec. 15, 2005, Chad Oxton was not qualified for an engineering technician opening with the City of Suffolk.

That changed on Dec. 16, 2005, the day he graduated from Tidewater Community College.

“TCC got me where I wanted to be,” said Oxton, distinguished by hair that reaches far below his shoulders, which is often covered by a helmet given his penchant for his Harley Davidson. “The day I graduated I was qualified. The day before, I wasn’t.”

Suffolk’s Public Works Department hired Oxton for the position he wanted thanks to his Associate of Applied Science in Civil Engineering Technology. Three promotions later, Oxton is an operations superintendent II who oversees six crews that do everything from digging ditches, patching potholes, plowing snow and cutting grass for Virginia’s largest city by land at 429 square miles.

The Navy veteran didn’t fancy himself much of a college student having grown up in a trailer park in Richmond, Maine. But his GI Bill© benefits presented options he didn’t want to squander.

TCC was a good fit for the construction worker, who initially settled on engineering, but struggled with the higher-level math required by the program. A civil engineering associate made a lot more sense.

“It was a natural fit,” he said. “Part of the program was soils with a soils lab, fluids with a fluids lab and concrete with a concrete lab. We were studying concepts that were pertinent to what I was doing for a living. It was stuff I could take to work with me the next day.”

Oxton, who also holds a Career Studies Certificate in Land Surveying and an Associate of Science in Business Administration, enjoyed learning under civil engineering technology program head Chris Cartwright. He shared with Cartwright his thoughts in the importance of adding a class in blueprint reading given the growing demands placed on construction managers.

Cartwright was all for it, and today Oxton teaches Blueprint Reading along with a Contract Documents and Construction Law class and a Planning and Scheduling class, all at the Virginia Beach Campus.

Each of the classes go well beyond theory. Oxton’s expertise in blueprint reading allows him to speak to it as it relates to framing, concrete work and site development plans. “I have experience in all of those industries so I can speak to those trades from residential all the way to heavy industrial,” he said.

The documents and law class is an eye opener that demonstrates how essential wording a contract is to avoid lawsuits. The scheduling class revolves around learning Microsoft Project; students receive a copy of the software program upon completion of the course.

“I like that I am teaching to my community,” Oxton said. “Every class I teach correlates to my community. I’ve seen students rise up in their careers or have opportunities presented to them from being a part of classes here.”

“Anybody in construction who is trying to make a career move is a good fit for civil engineering technology,” he said. “The TCC program gives you a chance to take your tool belt off and go to work in an office or behind the wheel of a pickup truck. At least there’s AC in the pickup truck!”

In Suffolk, Oxton likes that he has both a desk and a truck in addition to that Harley that is awaiting his next trek. He and wife Alyce are also passionate about animal rescue; both are on the board of directors for Giant Hearts Giant Dog Rescue, Inc. Though they recently lost their two Saint Bernards, they are regular fosters to Great Danes, English Wolfhounds and Mastiffs – as many as four at a time.