Bul Dut Thut spent more than a decade as a refugee. Now employed by TowneBank, he credits the college for starting his educational journey. 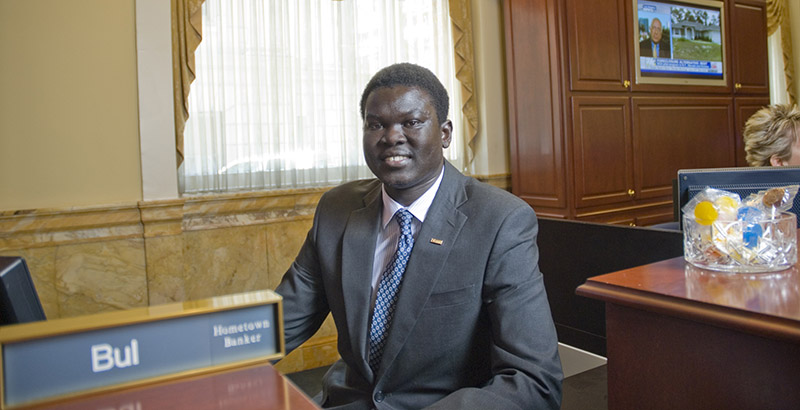 He was a lost boy of Sudan who found his place in the United States with the help of Tidewater Community College.

Bul Thut Dut graduated with an Associate of Science in Business Administration from TCC in 2007 before transferring to Old Dominion University for his bachelor’s. In May, he added his master’s in business administration to cap his education – a remarkable progression for a man who had no formal learning prior to immigrating to the Unites States as a teenager.

“TCC was the steppingstone for me,” said Dut, pronounced “Dute,” today a member services specialist at TowneBank in Richmond. “That’s where I started my educational journey. Like the slogan says, ‘From here, go anywhere.’ I didn’t always know where that meant, but I knew I was going to get there from TCC.”

Dut guesses he was 4 or 5 years old tending to the cattle in his native village, Kongor, when he heard the sounds of gunshots, signaling the spread of civil unrest in the southern part of Sudan. He fled quickly with nearby friends as he had no time to wait for his parents or siblings.

“It was disarray,” recalled Dut, who walked for what he estimated was at least a month to a refugee camp some 1,000 miles away in Ethiopia. The treks were at night, and Dut recalls eating “anything edible,” including leaves and fruit.

Officially Dut became part of the Lost Boys of Sudan, an estimated group of 20,000 children who left their homeland weathering hunger, dehydration, wild animals and violence in an attempt to survive.

Dut was lonely but lucky to start a new life as a refugee in the eastern African country. That’s where he discovered learning under a tree with no supplies to make it easier. The downfall of the government there three years later led to another pilgrimage, this time to Kenya, where he remained for more than a decade living in a parched settlement of mud huts.

But he continued to learn.

“We used dirt as a pen,” said Dut, who read his first book, a kindergarten reader titled “Hello, Children,” while there. “Usually there were about 20 of us sharing a book.”

By 2003, he and thousands of others received asylum in the United States after support from the International Rescue Committee. “Shock” is his early memory of arriving in Norfolk, awestruck by the America he had heard so much about. TCC was among his first stops, as Dut needed to transition from the Dinka dialect to learning English.

“Even now I’m still looking for a tutor,” said Dut, who completed English as a Second Language classes at TCC and now speaks clearly.

He found camaraderie and support at TCC, where he embraced not just his business classes but electives in history and religious studies. He worked a full-time job building box springs by day and attended classes at the Virginia Beach Campus at night.

“The professors were accessible and the classes small,” he said. “It wasn’t like a big college where you might get lost in the crowd.”

He holds a particular fondness for Fritz Zeisberg, former dean of Student Services on the Virginia Beach Campus.

Dut walked in TCC’s commencement exercises in 2007, remembering, “I was so excited because it was a dream come true. I felt like I had achieved a lot.”

He went on to graduate from Old Dominion two years later with a management major and psychology minor. Initially he worked in Norfolk first as a teller for Southern Bank and later moved to TowneBank in Richmond.

Dut has since reunited with his family that remains in Kenya. He and his Sudanese wife, Malang, have a 19-month-old daughter, Adau.

Last May, he completed his master’s in business administration from Regent University.

Civil war has returned to Sudan and famine continues to take the lives of many. Dut hopes to return one day to help the people there reach the heights he has reached.

“I always remained hopeful that there’s better days ahead,” Dut said. “I couldn’t draw a picture of it or paint it, but as soon as I was established in this country, I knew opportunity depended on the individual. Education was the key.”