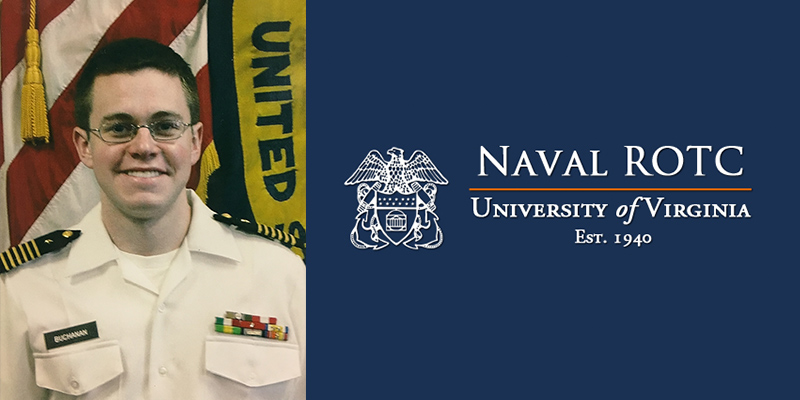 Ernest Trezevant “Bo” Buchanan IV was just two months shy of graduating from the University of Virginia (UVA) when he died in a car accident.

Bo’s father, Joe, was provost of Tidewater Community College’s Virginia Beach Campus at the time and had been a dean for 21 years before that.

Faculty and staff on that campus banded together to honor Bo with a scholarship in his name. The Ernest T. Bo Buchanan IV Memorial Scholarship recognize young men demonstrate exceptional leadership and service while maintaining a commitment to academic excellence.

Buchanan graduated from Cox High School in 2000 after serving as student government president and captain of the volleyball team. The Eagle Scout was recognized as an outstanding male student-leader-athlete in his class. 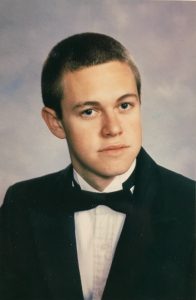 Buchanan received a full Naval Reserve Officers Training Corps (NROTC) scholarship to continue his education at Virginia to work toward a history degree and his dream of joining the Navy.

By 2004, he had worked his way up to the UVA NROTC Battalion Commanding Officer. He lost his life just shy of his 21st birthday.

“He was well liked not only by his peers but by the other active duty officers here as well. He was an example to us all.”

David Wattenmaker, an NROTC Marine, said, “Everyone who knew Bo learned something from him. He set an example that people could learn from.”

Joe Buchanan donated more than $10,000 to his son’s scholarship fund in honor of his wife, and Bo’s mother, Susan, an award-winning English and journalism teacher and department chair. Joe was president of the National Association of Student Personnel and received national, regional and state leadership awards for his service. Susan leads the women’s ministry of her church and serves as president of a local chapter of Philanthropic Educational Organization, a philanthropic sorority that supports female students in higher education.

An international student pursues a future in engineering

When Bikatui came to the United States from Togo in West Africa, he didn’t know English. His first language was French.

“Before I started my engineering courses, my fellow country people were telling me that English was too hard,” said Bikatui. “They said ‘The material is in English. The instruction is in English. The language is English. You’re going to have trouble!’ But I didn’t see it that way. I didn’t want to be underestimated because I speak another language.”

As an international student at TCC, he found a common language in mathematics – and one-on-one support from his professors encouraged him to keep going.

“Chemistry is the same. Math is the same. Once you know them, you can find your way to science,” Bikatui said. “My TCC professors have always appreciated me. One of my teachers comes in every Sunday for students like me who want help with the material. I spend my Sundays over there with her.”

Bikatui will graduate next spring with his engineering degree and transfer to Old Dominion University to pursue a bachelor’s in chemical or biomedical engineering.

Fraser was a father of three with a full-time teaching job when he enrolled in TCC’s business administration program.

A Navy veteran with eight years of service, Fraser had always dabbled in areas, such as corporate taxes and accounts payable with his small businesses. He knew he needed a formal education in the field to grow his companies and follow his dream of working in accounting.

TCC was a smart financial choice for the money-conscious entrepreneur, who already had a daughter in college and a career when he came back to school.

“The first time I went to college, I had access to the GI Bill,” said Fraser, “so that degree was paid for. But this second degree – I was on my own. I knew I would be paying out-of-pocket. Once you go two semesters on student loans the money starts piling up.”

Scholarships didn’t even occur to Fraser as a possibility until he got on his daughter about applying for her own scholarships her junior year at Liberty University. “I’m on the phone encouraging her to look for scholarships, when the light dawned and I realized I should be looking for my own scholarships!” he said.

A quick web search led him to TCC’s scholarship page, where he realized he could qualify for awards through the school. He won the Coca-Cola Enterprises Scholarship and was shocked when the award amount of $500 hit his student account.

“I had no idea how large these awards are,” Fraser said.

When he won the Ernest T. Bo Buchanan IV Memorial Scholarship, Fraser realized his final semester would be paid for in full. “My scholarship awards were almost to the penny perfect. I had $80 leftover, which I used to buy a book. To know my entire last semester was paid… it was such a blessing.”

Fraser is currently enrolled in a master’s program in taxation accounting at Liberty University. His favorite part of running his businesses is being able to give jobs to people looking for flexible work – and employing his ex-students.

A legacy of giving

In addition to the TCC scholarships, the Buchanan family also offers scholarships in Bo’s honor at the University of Virginia and Cox High School.