Billy Duke had worked at International Paper for 13 years when the long-time mill in Franklin announced it was closing in 2009. Despite more than a decade of experience, Duke realized he lacked a major necessity in furthering his career, and ironically that was paper.

“I didn’t have a degree,” he said. “I’ve always had the ability to do whatever I wanted, but I didn’t have any paper. Everybody hiring was looking for paper – that college degree.” 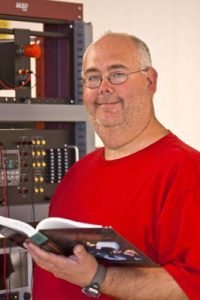 Duke didn’t have trouble finding work after high school, following his father, Buckley, to International Paper. He worked at the mill for 13 years as a processer, and when it shut down, Duke wanted to find a better opportunity for himself and his family, which includes three boys: Dylan, 8; Tyler, 5; and Zack, 7 months.

He surprised himself by loving it.

“I loved it all – my classes, my teachers, my classmates. I was surprised so many people were around my age or older,” said Duke, who is 38. “When you think about college, you think about recent graduates from high school. I was actually shocked.”

Duke graduated in December with a 3.96 GPA and an Associate of Applied Science Degree in Electromechanical Controls Technology.

Duke hadn’t enjoyed school much at Southampton High, where he graduated in 1992 and had only dabbled in college previously, taking welding classes at Paul D. Camp Community College. He brought a different mindset to TCC.

“I have thoroughly enjoyed school at TCC,” he said. “A lot of it has to do with maturity. I wanted to set an example for my kids and show them, ‘If Daddy can go back to school, you can do what you need to do to achieve.’”

Duke received particular motivation from Stout, whom he calls one of the best teachers he has ever had.

“He is one of the rare individuals who is extremely intelligent and can bring it down to the level of understanding if you don’t already have a degree,” Duke said. “His teaching ability is unbelievable. He makes it easy for you.”

These days Duke works at the Newport News Shipyard as an electrician, and credits his education at TCC for his new job.

Duke is continuing to take night classes toward a Mechatronics Certificate, which he will complete this spring. He also plans to pursue a Renewable Energy Technologies Certificate.

“I’ve explored a whole new avenue,” he said. “TCC really helped me. I’m loving it right now. I know I made the right decision. I can honestly say it’s never too late to start over if you put your mind to it.”