At work on a doctorate at Johns Hopkins, the founder of two nonprofits credits TCC

“If it wasn’t for that school, my socio-economic level and my potential to be creative would have never expanded beyond the street.” -- alumna Ateba Gaines 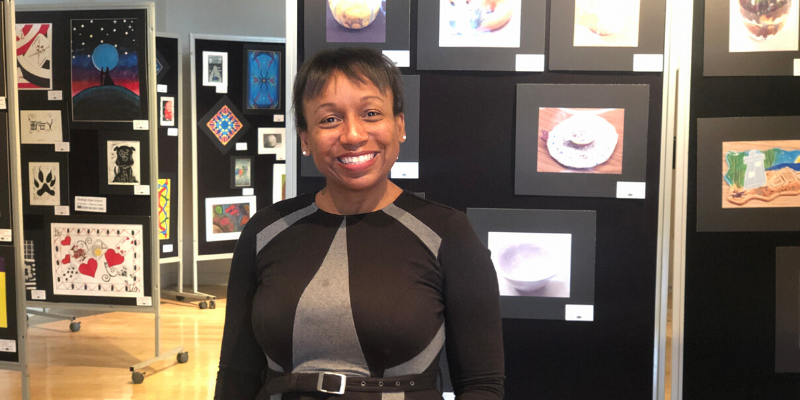 Ateba Gaines didn’t think she was very smart, but Tidewater Community College’s Dr. Samuel Lamb told her she would one day have the title “Dr.” preceding her name.

At the time he was provost of the Portsmouth Campus, and she was a work-study student in his office.

Back then, she wondered, “What is this man talking about?”

Today the 46-year-old entrepreneur holds a master’s in international management, touts a resume that includes Nike and a nonprofit that attracted support from Taylor Swift, Kristen Stewart and Lea Michele. She’s spoken at Stanford and will talk to an audience at Yale in April. She’s immersed in a second nonprofit focusing on creativity and youth.

None of it would be possible, she says, without those first steps she took at TCC, where she earned an associate in business administration and developed the confidence to succeed.

“I like to say TCC refined my street hustle, but really TCC saved my life,” she says. “If it wasn’t for that school, my socio-economic level and my potential to be creative would have never expanded beyond the street.”

Gaines grew up in Jersey City, surrounded by her father’s abuse and a working mother who struggled to put food on the table. She amused herself by dreaming up ideas for businesses; one involved singing with a cousin at an old trash site and charging a quarter for admission. A move to Newport News didn’t provide the escape she hoped for when her mother started another unhealthy relationship.

Gaines struggled at Denbigh High School, got pregnant shortly after and made money selling herself on the street. It was all she could think of to put food on the table until one-day her wide-eyed son told her of his plans to be a preacher.

“You want to be a preacher?” she said, staring intently at the 2-year-old. That led her to find her own church, Calvary Revival in Norfolk. Her faith motivated her to find a better future. She started classes at TCC and surprised herself with good grades.

“I didn’t even know what Dean’s List was when they told me I was on it,” she says.

On a whim, she ran for president of Student Government on the Portsmouth Campus and won. “I learned how to communicate, how to make presentations, how to delegate authority and how to become a leader,” she says.

An elective she didn’t want to take, Intercultural Communication, opened her eyes even more. The textbook, “The Do’s and Taboos of International Trade,” became her go-to read. The instructor encouraged her to dream big – graduate school big.

“I didn’t even have my associate degree and she wanted us to think about graduate schools,” Gaines recalls.

Gaines fixated on Portland State University after reading about its international management program. She graduated from TCC and after completing her bachelor’s in international business at Christopher Newport University, she applied.

Accepted into Portland State, Gaines drove a U-Haul pulling her beat up Ford across the country, her son in tow.

“We drove cross country and when we got to the Oregon sign, we got out and danced,” she says.

Achieving her master’s led Gaines to an opportunity at Nike, where she started in customer service, was promoted in less than a year and ultimately managed the shoe company’s southeast Asian accounts.

A marriage to a Virginian brought Gaines home to Hampton Roads, where she’s done a bit of everything. She worked her way up at Old Dominion University from instructor to chief departmental advisor in international marketing. She started her own nonprofit, Shoe Revolt, inviting celebrities to donate used shoes, hence visualizing the initiative of kicking human trafficking to the curb.

“Instead of seeing scary pictures, I wanted to use celebrities to bring attention to the problem,” she says.

Gaines was overwhelmed when Swift and Michele donated along with others including Sarah Jessica Parker and Barbara Corcoran from “Shark Tank,” now a business contact.

Her world went blank when she suffered a stroke at age 40, told she would not likely be able to walk or talk again or regain her executive leadership functioning. Gaines didn’t let that defeat her. Instead, she rehabbed to the point that she started the doctorate program in entrepreneurial leadership at Johns Hopkins University – making good on those words from Lamb she can recite as if she heard them yesterday.

Last summer, she started another nonprofit, Unreasonable Kids, which encourages youth from 7 to 17 to think out of the box in regard to social issues.

“Where adults see problems, kids see opportunity,” she says. “I want to teach them young that they have a voice.”

The Yorktown resident, a mother of three, will teach multiple camps at TCC this summer under the Unreasonable Kids umbrella. She loves the idea of returning to the college that she credits with seeing more in her than she saw in herself.

“I learned through TCC to say yes to the process and any opportunity that presents itself,” she says. “It’s true what they say. You really can go anywhere from there.”