“This degree has taken blood, sweat and tears, but it’s also given me my purpose.” -- Arlethia White-Farris 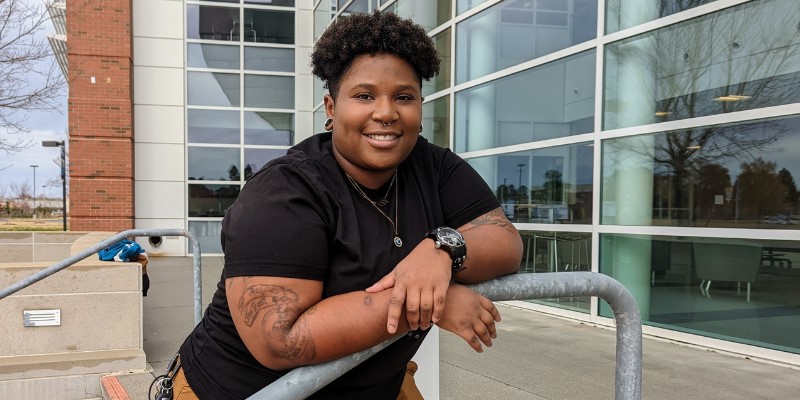 Arlethia White-Farris does not like to talk about her military service. She will tell you that she’s a proud Army veteran who saw combat in Afghanistan and Kuwait. She was given an honorable discharge after two years of service and returned to her home in Capitol Heights, Maryland.

Back in the states, she dealt with Post Traumatic Stress Disorder as well as the negative influences of her surroundings. The family struggled and was often without power and used the gas oven to heat their home.

“There was a lot of gang activity, and I was getting drawn back in. I was also selling drugs to help pay mom’s medical bills and keep the lights on,” she said.

Seeking a fresh start, Arlethia, 28, moved to Hampton Roads to live with her aunt near Tidewater Community College’s Portsmouth Campus. She got a job, but realized she wasn’t getting ahead. Then the bottom fell out.

“I hit rock bottom when I lost my job, and my car broke down. That’s when I decided to try college. TCC was within walking distance of where I was staying and it was time,” she said.

That was the start of an academic journey that has had many challenges. But through it all, Arlethia has persevered. She will earn an Associate of Applied Science in Graphic Design this month.

“I started at TCC to better myself and I’m an entirely different person now. The student center staff allowed me to open up, explore my poetry and just grow,” she said.

Arlethia was also supported by the staff of the Open Door Project, a program designed to help first-time college students succeed in school.

“I definitely gained a community at TCC. I belonged and the people make sure everyone who walks through the doors feels welcome, seen and heard,” she said.

While at TCC, Arlethia was president of the NAMI (National Alliance on Mental Illness) chapter on the Portsmouth Campus. She says that her mental health has steadily improved thanks to the work of the group.

She hopes to use the experience and her degree to open Art Release 360, an organization for people who need support with their mental health. “It will be a place where people can use art to heal their traumas,” Arlethia said. “I want to help people express their thoughts without judgment and provide therapy to those in need.”

A year after starting at TCC, Arlethia became financially stable when she landed a job as a recreation aide with Norfolk Naval Station. She learned about the job through an on-campus job fair in the student center. She now works doing security for a state agency, and also does freelance graphic design work to build her portfolio.

Arlethia sends a shout-out to TCC staffers Alicia Peoples, Charlene Taylor, Jeanine Anderson and Zebeth Newton for looking out for her and going the extra mile.

“This degree has taken blood, sweat and tears, but it’s also given me my purpose,” she added.

She hopes to one day work in film, telling Black stories that can be overlooked or untold. She has even written a play that she is reworking into a movie script.

She is planning to attend film school next year to hone her craft. “I want to tell authentic stories as raw and real as I can,” she added.

“Over the years, I’ve had a lot of people tell me that being an artist and telling stories is not a real job,” Arlethia said. “But I found a new path that will allow me to do what I love. What could be better than that?”