Army veteran continues to serve his country thanks to TCC grant

"Once you learn at TCC, you can do anything. It’s remarkable — from here, go anywhere.” — entrepreneur George Brockman 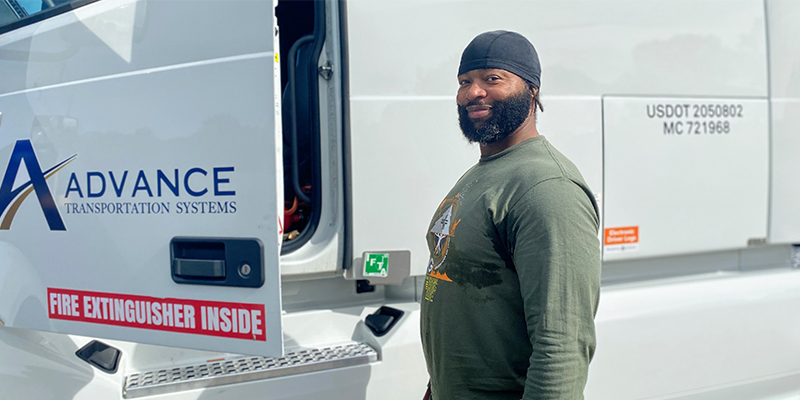 One-third of TCC’s students are military-related. This week we highlight some of them in honor of Veterans Day, Nov. 11.

When George Brockman talks about running for president one day, it’s hard not to take him seriously.

The Army veteran worked as a nuclear engineer and studied business in Germany. He worked for Northrop Grumman, and he’s studying for both the LSAT and MCAT at the same time. The cabin of his tractor-trailer provides ample space and quiet for that. Because in addition to all of that, Brockman is an operator/owner of his own trucking company.

He completed an associate degree in truck driving and paid no tuition thanks to earning a scholarship specifically for military-related students looking to transition to a trucking career. Tidewater Community College’s Center for Military and Veterans Education received a sixth consecutive federal grant this fall to help train military veterans and their spouses for careers in trucking.

Brockman chose the trucking path for the same reason he opted to join the military after graduating from Western Branch High in 1993.

“I wanted to serve my country.”

He credits truckers for keeping America moving, noting the critical role of delivering freight during the COVID-19 pandemic. When his sister, a nurse, lamented the lack of tissue and sanitizer at the hospital last spring, Brockman wanted to find a meaningful way to contribute.

“It’s the pandemic that got me into this truck,” he says, pointing to his rig parked at TCC’s Suffolk location, where students complete instruction. “If I’m moving toilet paper and hand sanitizer, I’m helping people.”

Brockman, 45, credits TCC’s trucking program for its thoroughness. “They taught me intensely,” he says. “It’s more than driving; you learn how to make safety checks. Once you learn at TCC,  you can do anything. It’s remarkable — from here, go anywhere.”

Brockman drives up to 70 hours a week and subcontracts his trucks from Advance Transportation Systems. He’s got the cabin set up for him to sleep comfortably and study at night for the LSAT. He doesn’t want to practice law, but he regards himself as a scholar. He’s completed some law course and wants to earn a juris doctor degree purely for the knowledge. Brockman intends to pursue medical school at the University of Virginia after that.

It’s unorthodox, but so is he. He dresses down and carries himself in an unassuming way.

He recommends truck driving to transitioning military members because of the service aspect and the discipline required to be successful at it.

Camaraderie, a natural part of the military mindset, also applies to trucking. Brockman gained another family from his new career. Truckers don’t hesitate to help each other on the road, he said. One anonymous trucker put a $100 bill in his hand a few months ago when he thought Brockman looked as if he needed some help.

“It’s a family inside of a family,” Brockman said. “All nationalities, all origins, male or female; there’s no discrimination. You meet a lot of great people on the road.”

Brockman’s already started his own company, and even after he becomes a doctor one day, he won’t give up trucking completely. “It’s part of who I am, part of my legacy,” he says. “If you’re in the military, it’s because you want to help your fellow citizens. This is another way to do that.”

For special support services for military-related students, visit the CMVE or call 757-822-7645. You can also email military@tcc.edu.