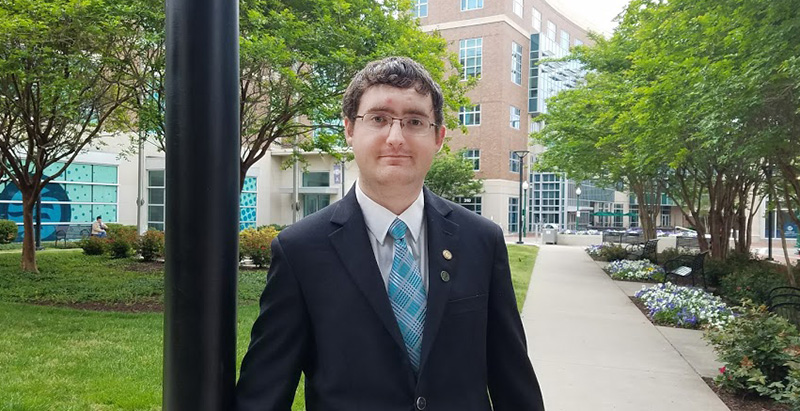 But life spiraled out of control when his great grandmother died, leaving him without a home of his own.

Tidewater Community College gave him the start he needed to succeed.

Justice, who earned an Associate of Science in Business Administration, is pursuing his bachelor’s in international business at Old Dominion University.

“He is the first in his family to earn a degree, a real feat considering the start he had in life,” said Kay Williams, director of the college’s Open Door Project, which offers free academic, career and cultural counseling to low-income, first-time college students.

Justice’s mother left when he was 6. His father was in the military, leaving Justice bouncing from one family member to the next.

He ended up living with his great grandmother. From there, life became predictable and comfortable until she died while he was a student at Granby High School.

“I went from having a very structured life with meals and homework help to no structure at all,” he said. “I had to find support from friends and teachers for basic things like rides to school events and even food.”

Justice lived with his father during his last two years at Granby, but money was tight and supervision nil. His grades plummeted, and he rarely left home for anything other than school.

“I knew I had to get my life together,” he said. “When everything is thrown off course, you have to take stock and begin moving forward.”

Justice became one of TCC’s Outstanding High School Graduate Scholarship award winners after graduating from Granby’s International Baccalaureate program. The award is granted to one senior from each public high school in Chesapeake, Norfolk, Portsmouth and Virginia Beach. Recipients of the renewable scholarship receive tuition and fees for 12 credits.

Justice served as a student ambassador at the Norfolk Campus, representing the college during open houses and at community events.

He credits his three “moms” – Williams, Willette Hackney-Davis and Linda Davis – all Open Door Project staff, with helping him stay on track.

While at TCC, Justice became a peer mentor for the Open Door Project and was named a CIVIC Scholar. The program fosters a spirit of civic engagement, professionalism and service leadership to create a network of issue-conscious leaders.

“I enjoyed learning from those with real-world experience,” he said. “I encourage those coming after me to not undersell the institutions of higher learning that we have in Virginia. You can get an incredible education right here at home.”

“Aric is a bright, conscientious and personable young man,” said Peter Shaw, professor of business administration and management. “He’s highly organized and will have a terrific future in whatever endeavor he chooses to pursue. I venture to believe he will be one of TCC’s most successful alumni.”

Justice plans a career in international business with a focus on East Asia. He advises students to connect beyond the classroom, noting, “If you stay involved and gain connections, you’ll learn way more than you would just going to class.”