The inspiring story of the Chesapeake native has gone viral 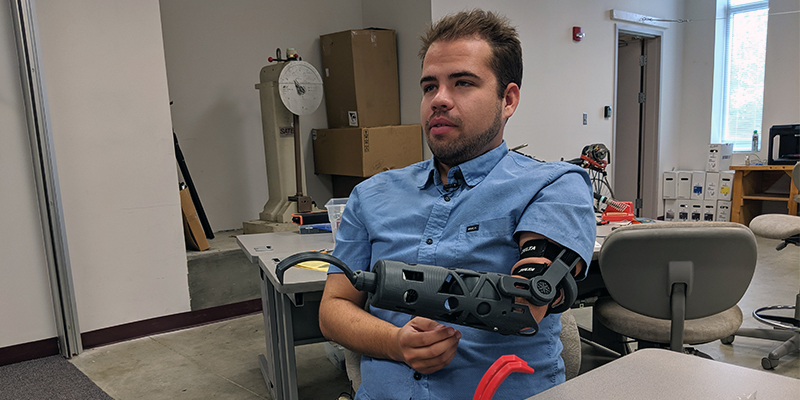 The end product, a prosthetic he refers to as “Light Arm,” is not only beneficial to him but inspiring to others.

Bafetti’s story, as told by WTKR reporter Margaret Cavanagh, went viral last week, picked up by news outlets that include CNN and CBS This Morning. The story appeared in local affiliates ranging from Miami and Nashville to Columbus, Ohio and Las Vegas. The Virginian-Pilot also featured him on April 19.

“I was surprised it went coast to coast,” said Bafetti, 22, also contacted by a radio talk show on WGN in Chicago. “It’s been pretty cool.”

Bafetti will finish the coursework for his Associate of Science in Engineering by the end of the summer and transfer to Old Dominion University this fall for his bachelor’s in mechanical engineering. 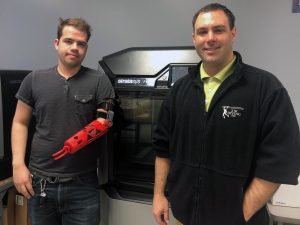 AJ Bafetti, left, designed his own prosthetic arm with the help of Chris Gollogly, president of TCC’s engineering club.

The Grassfield High School grad, born without a forearm, grew up a LEGO lover and wanted to turn his love of building into a career. Economics steered him toward TCC, where he has excelled and taken part in the VCCS-NASA “STEM in Flight” internship.

Bafetti got the idea to make his own prosthetic during his first semester here. He had only ever used a 3-D printer to make a phone holder before but had the confidence he could design his own limb after sharing concept sketches with Professor Edward Morris.

The TCC engineering professor encouraged him as did Paul Gordy, program head for the department who also heads the college’s Engineering Club. Bafetti received assistance from club president Chris Gollogly and the manufacturer AMTEK, which provided the materials, a plastic similar to LEGOs.

Bafetti tested several prototypes using the computer-assisted design software AutoCAD. To maximize efficiency, it’s important that that limb be lightweight, something he continues to perfect.

“Ideally it would be less than a pound,” he said.

Bafetti uses the arm now, which includes a grey hook in lieu of a hand. He plans to wear it during all waking hours once final design kinks are worked out.

While he calls it a “passion project,” Bafetti discovered by doing it that he wants to continue to help others by designing their prosthetic limbs. Working closely with faculty and peers at TCC, he said he learned collaborative skills that will help him in the professional world. 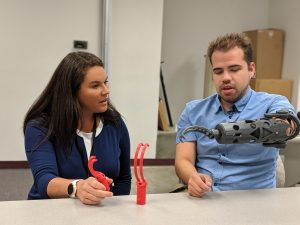 “As engineers, we’re supposed to be problem-solvers,” Bafetti said. “That’s want I want to do.”