Come jam at the Norfolk Campus! 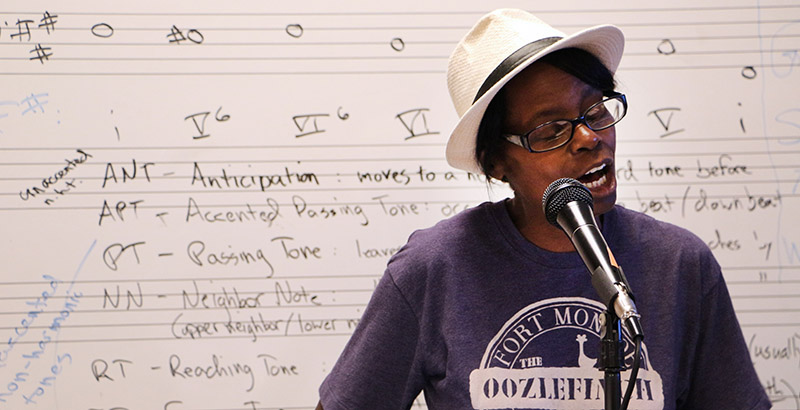 We’re taking a peek inside the classroom to offer students a sampling of what they might experience. This week we visited a music class at Tidewater Community College’s Norfolk Campus to see learning in progress. Inside the classroom:
Like to jam? Students in Advanced Jazz Ensemble (MUS 239), also known as the Blue Moon Jazz Ensemble, study techniques, interpretation and musical improvisation. You don’t sit still in the class that consists of performance from standard jazz and American songbook repertoires in various live settings, including pop-up concerts. The ensemble emphasizes group interaction, music theory and improvised solos.
Why this class is fabulous:
“Students gain a lot of theory and practice in this class and really build their performance resumé. It’s not recorded or in a studio, so they have to be prepared for whatever might happen. Whatever distractions are going on, they have to learn to work past it and stay focused. All the music they play in the jazz ensemble will be music that they might run across out in the world as a gigging musician.” – Mark Denison, music program head

Tip:
Aim to practice every day, whether it’s in class or at home.

Student voices:
“I’ve been coming to TCC off and on for a few years. I applied to a few universities and was accepted into their music schools, but rejected by their academic side. So I came back to TCC to fix my grades. Once I heard about the new Associate of Fine Arts, I decided to stick around and pursue it.” – Emma Tracy, vocalist

“I’m the bass player in the class. I’ve always been attracted to it and even play in small cover bands. My favorite part about playing bass is being able to drive the band forward while keeping a steady groove going. I like being one of the people who ensures the band gets to where it needs to go.” – Kyle Russo
About the professor:
“I’m not shy about playing any instrument to teach my students. I tend to lead by example. If I want the band to practice, I practice too and they know it. We’re all members of the band – I just happen to be the leader.” Denison joined TCC in 2014 as the program head for music at the Norfolk Campus. He began teaching music as a high school band and choir director in Klamath Falls, Oregon. Once he earned his master’s in conducting, he switched gears and taught choir and band to elementary school children in Tacoma, Washington. Over the past decade, Denison’s work has taken him to six states, including a post at Treasure Valley Community College in Idaho and Oregon. Although low brass is his specialty, he’s versatile.