A Top 10 look at a year to remember at TCC

A new prez. A viral professor. It was a memorable 2019 for the college 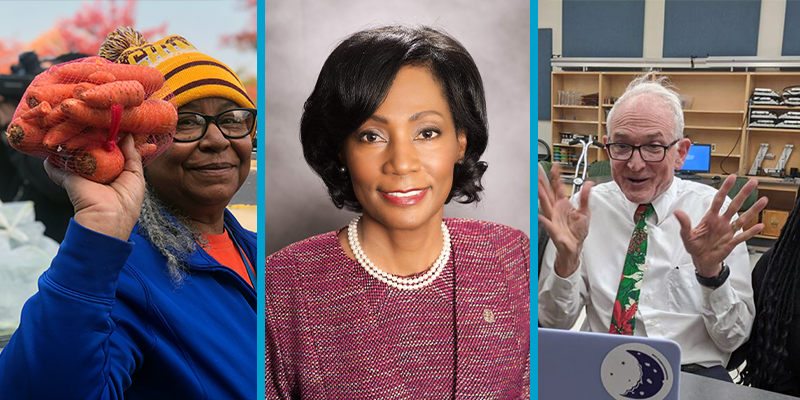 A new president, a professor gone viral and a celebration of generous donors and collaborative partnerships are among a year of highlights for Tidewater Community College in 2019.

Check out our TCC Top 10 list of storylines that made a mark.

10. The college’s Norfolk and Portsmouth campuses celebrated their first-generation students, faculty and administrators in events held in early November. The days were selected to coincide with the signing of the Higher Education Act of 1965.

9. Thanks to a partnership between TCC and Chesapeake Public Schools, 52 high school graduates earned career and technical training credentials during May commencement in areas that range from mechatronics to pharmacy technology to welding.

8. TCC received a fifth federal grant to help train military veterans and their spouses for careers in trucking. The grant, administered by the college’s Center for Military and Veterans Education, allows veterans to train for in-demand careers at no cost to them.

7. A partnership among TCC, Hampton Roads Transit and Norfolk Now to prepare Hampton Roads residents for careers as bus operators launched in May and graduated its inaugural class in the fall. A second cohort is under way.

5. TCC will continue to grow in the next decade thanks to several generous donors. The TCC Perry Center for Visual & Culinary Arts and Hospitality Management received a major gift from philanthropist Jim Hixon. A $500,000 grant from TowneBank will also benefit the TCC Perry Center and help expand the Regional Automotive Center. The Hampton Roads Community Foundation gave the TCC Perry Center a $500,000 grant spread over five years. Stanley Black & Decker earned the Chancellor’s Award for Leadership in Philanthropy for its support of the Skilled Trades Academy. Black & Decker donated $275,000 in new industry tools and equipment, the biggest in-kind investment by the company ever in the commonwealth. The SunTrust Foundation’s $75,000 grant will support the Skilled Trades Academy. Builders & Contractors Exchange funded $5,000 in scholarships for the academy. The Don Carey REECH Foundation also gifted TCC’s Women’s Center STEM Promise Program with $2,500.

4. It’s never been easier to transfer from TCC to Old Dominion University or Virginia Wesleyan University. The Guaranteed Transfer Partnership Agreement, signed in September, ensures a seamless transfer to ODU for TCC graduates. The Fair Transfer Guarantee Agreement between VWU and TCC allows graduates who earn arts or science associate degrees to enter VWU as juniors.

3. TCC put into action plans to eliminate food insecurity among its students. The college and the Foodbank of Southeastern Virginia and the Eastern Shore are new partners in a five-year initiative to eliminate the food insecurity that impedes many TCC students from completing their higher education. TowneBank’s $250,000 donation will go toward the food. A Campus-Based Pantry and Food Scholarship Program are in the works and a mobile pantry on the Norfolk and Portsmouth campuses started in the fall. In addition, a partnership between the Virginia Beach Campus and the city’s Department of Human Services gives TCC counselors and advisers a streamlined way to refer Virginia Beach students to the resources they need. Students can receive food, mental health counseling and housing support.

2. Student Erica Church’s tweet on the animated teaching style of Professor David Wright made a big bang. The viral post, viewed by more than 30 million people, created headlines around the world and led to the beloved physics professor granting interviews to Yahoo, the BBC, NPR and Good Morning America. He and students Church and Kierra Brothers will appear on “The Kelly Clarkson Show” on Jan. 26.