A $10K gift that keeps giving 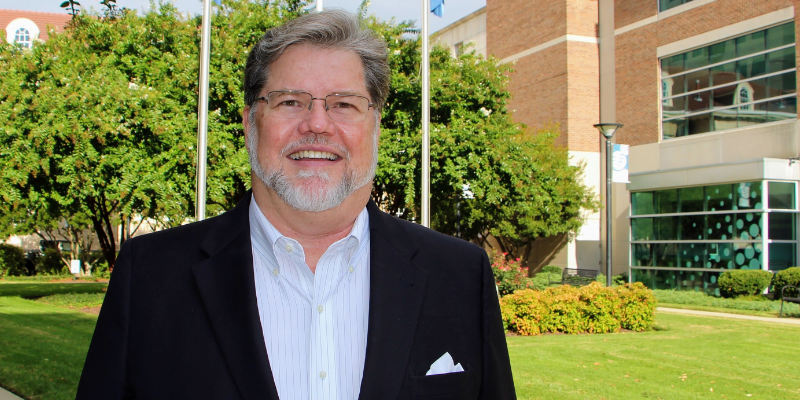 Shaw was often seen in front of a TV camera doing interviews with local TV reporters about business issues of the day. Interestingly, Shaw completed more than 100 interviews over the last decade.

Shaw got his start at TCC as a student in the 1970s. He was the first of three children in his family to earn a degree. “My mom was a single parent and resources were tight. I came to TCC because the price was right and it was also very accessible,” he said.

Shaw established a scholarship for TCC students just before he retired in 2022. The Business Pathway Scholarship was launched in 2021 with a $10,000 gift and has already provided scholarships for five students.

“I remember working my way through TCC and later Old Dominion and William & Mary. I got help from a lot of people and this is my way of paying back the generosity I received,” Shaw said.

Shaw taught business administration and management for 25 years at TCC. He says his fondest memories are those aha moments. “When you look in a student’s eye and see that they get it. Those are the moments I’ll treasure above anything else,” he said.

Shaw was well-loved by his students and recognized for his real-world knowledge of the topics he taught. He often mentored students and connected them with opportunities. One of his students, Griffin Leach, landed a summer internship at Towne Bank, thanks to the connections made by Shaw. Leach went on to work as an investment analyst on Wall Street and today is working in Washington, D.C. with a private equity group.

Recognized for his teaching excellence numerous times during his career, Shaw was TCC’s Professor of the Year in 2010 and he received the John and Suanne Roueche National Teaching Excellence Award from The League of Innovation in the Community College in 2012.

Shaw continues to serve the community as vice chair of the board of Future Hampton Roads. You can also still see him on local TV stations talking about current business issues.

“TCC is where I began my college journey and my gift to TCC is my way of saying I have not forgotten that,” Shaw said. “I see my contribution as a way of paying ‘rent’ for living in our society.”

If you would like information about TCC scholarships or would like to help students in need, please reach out to TCC’s Educational Foundation by emailing foundation@tcc.edu.