Saluting TCC grads and the military at 65th Commencement Exercises

“TCC gave me a solid academic foundation that transformed an average student into someone who knew that she was capable of succeeding.” – Navy Cmdr. Shannon Wiens, keynote speaker 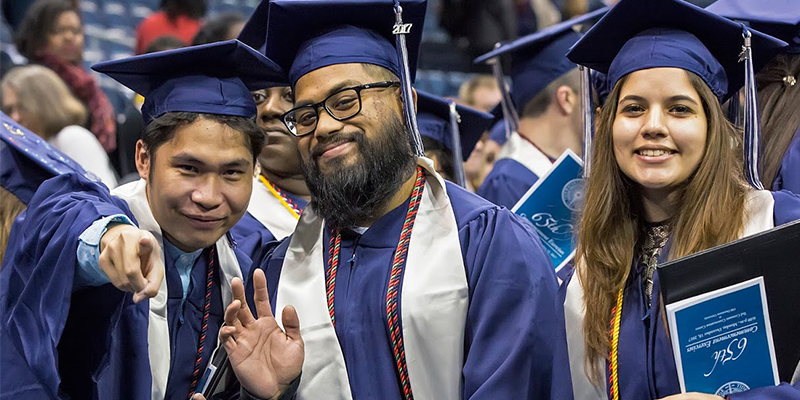 One week before Christmas, Tidewater Community College celebrated its graduates along with a military milestone at the Ted Constant Convocation Center.

“I do not think I would be here this evening speaking to you in this uniform without TCC,” Navy Cmdr. Shannon Wiens said in an emotional speech to the graduates. “TCC gave me a solid academic foundation that transformed an average student into someone who knew that she was capable of succeeding.”

Wiens was the keynote speaker for TCC’s 65th Commencement Exercises when nearly 600 of the college’s 1,800 graduates walked in cap and gown in a ceremony distinguished with a military flair on Monday night. In addition to recognizing its newest alumni that earned associate degrees and certificates, TCC commemorated the 100th anniversary of Naval Station Norfolk during the 65th Commencement Exercises.

Wiens, executive officer of Beachmaster Unit Two at Joint Expeditionary Base Little Creek-Fort Story, attended TCC for three years prior to completing her bachelor’s in geology at Old Dominion University. Her 17 years of service in the Navy include support of two major initiatives: Operation Enduring Freedom and Operation Iraqi Freedom.

The Great Bridge High School graduate considered going away to school but ultimately decided on TCC where she connected with multiple mentors, including Professor Lynn Rainard, who would ultimately become her daughter’s godfather.

“I am a firm believer had I attended a four-year school immediately after high school I would have been another young student in a sea of faces,” Wiens said. “I would not have gotten to know my professors on a personal level. I would not have received scholarships and graduated from college with zero student loans.”

Wiens urged the graduates to, “Reflect on your time at TCC and remember those educators and mentors who made an impact on your life.”

President Edna Baehre-Kolovani surprised Wiens by presenting her with a framed Associate of Science in Science. Wiens was just a few credits shy of a degree when she transferred to Old Dominion, but given her bachelor’s degree and military service, she satisfies the requirements to be an official alumna.

Student speaker Jessica Evans, a veteran of the Army National Guard, also fought back tears in relaying her personal journey of overcoming a traumatic brain injury suffered during a deployment to Iraq to becoming a TCC graduate with an Associate of Science in Business Administration.

With her husband, Nathan, and 2-year-old son, Aaron watching, she urged her classmates to be the active ingredient in their lives and savor their accomplishments.

“Be proud and celebrate that you could step out of your comfort zone, to earn that associate degree, to earn that certification,” said Evans, who will transfer to Norfolk State University to major in construction technology. “When anyone, anyone, tries to diminish your accomplishments, remember that you earned your seat here today. You are not here by accident.

“No matter what life throws in your next step, remember to stay committed to your journey, endure the detours and keep moving.”

President Kolovani, like many in the audience, was moved by Evans’ message. “That was awesome, wasn’t it?” she asked, lauding the persistence of TCC’s graduates, many of whom shared their heartfelt stories at a weekend graduation brunch.

The conferring of certificates and degrees followed. Graduates received pins from TCC’s Alumni Council and joined a network of 80,000-plus alumni and counting.