One of TCC’s own named YWCA Woman of Distinction 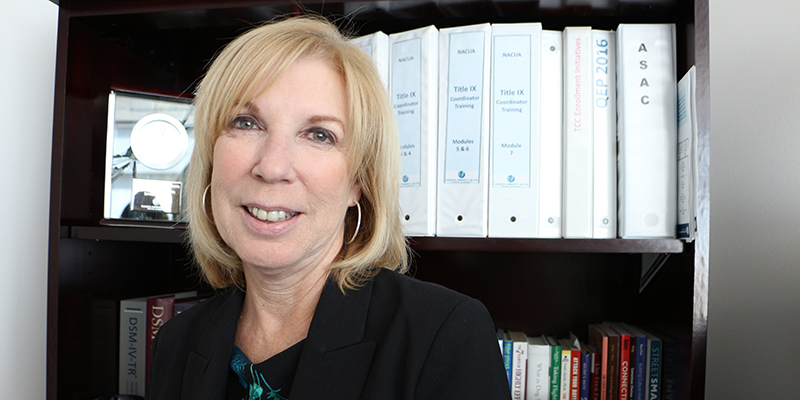 Christine Damrose-Mahlmann has been named a 2018 YWCA South Hampton Roads Woman of Distinction.

Tidewater Community College’s associate vice president for student services is one of 12 honorees who will receive the award at a reception at the Waterside Marriott on March 29.

“To be recognized by my peers and to know so many great women who have received this award before me is very humbling,” said Damrose-Mahlmann, an alumna of TCC.  “I think the most important thing we can do for women is help them become educated because that leads them to be self-sustainable and able to contribute economically.”

Damrose-Mahlmann, a Portsmouth resident, joined the college in 1996 just before the Norfolk Campus opened downtown.  That year, she started a women’s support group that met at the YWCA.

“It was stunning to see the women in that environment,” she said. “They were growing and learning from each other. They talked about their classes, the obstacles they were facing and about their fears.

“Working with them helped me see that women can overcome anything from domestic violence, poverty, child care issues and even homelessness.”

That group was the precursor to the Women’s Center on the Norfolk Campus. “We were growing and really needed to be back on campus,” she said. “We were given a small faculty office on the fourth floor of the Martin Building and took off from there.”

TCC President Edna V. Baehre-Kolovani was recognized as a 2016 YWCA South Hampton Roads Woman of Distinction. Other prior winners from the college are Ivory Warren, program head for human services, and Jeanne Natali, director of the Intercultural Learning Center.

Natali nominated Damrose-Mahlmann for this award and said, “Christine came to TCC to finish her education and found her professional home. Through hard work and persistence, she began as a student employee and worked her way through the ranks, gaining experience across student services at the college.”

Natali added, “Today, she uses her professional expertise to ensure that our students have access to the highest quality programs and support services so that they can meet their academic and professional goals.”

A licensed professional counselor, Damrose-Mahlmann has a history of community service, which includes work with a crisis hotline and grief support groups. She created a Violence Against Women training course for administrators at the college. She routinely collaborates with local agencies to ensure that students of all ethnicities and socioeconomic backgrounds have access to opportunities at TCC.

“I think the women’s movement is in the best place it’s ever been because people are listening and men are standing with women to make necessary changes,” she said.

Damrose-Mahlmann earned her doctorate in community college leadership and a master’s in education from Old Dominion University. She got her start at TCC with an Associate of Arts in Liberal Arts.

A baseball enthusiast, Damrose-Mahlmann and her husband, Jim, have visited every Major League Baseball stadium except Houston and Toronto. The couple also enjoys time at the beach with their two adult children and grandchildren.

For ticket information for the luncheon, contact the YWCA South Hampton Roads at development@ywca-shr.org or 757-625-4248.