TCC moved up to No. 5, seven spots higher than one year ago, in the rankings produced by the editorially independent news project. 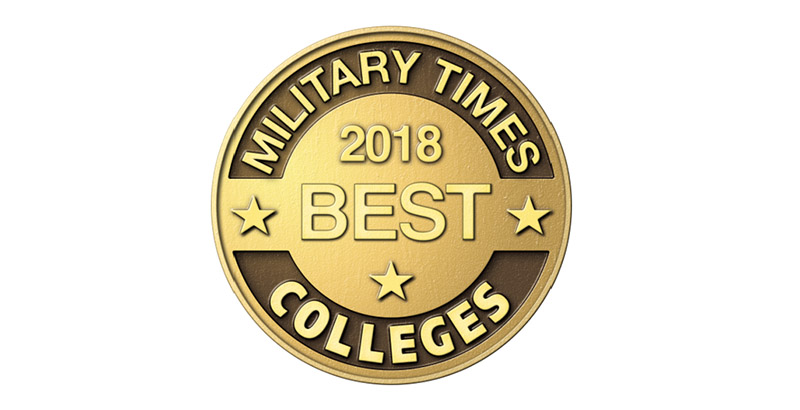 Tidewater Community College is among the top two-year schools in the nation for veterans, according to rankings released by Military Times on Nov. 20.

TCC moved up to No. 5, seven spots higher than one year ago, in the rankings produced by the editorially independent news project. More than 600 colleges took part in this year’s detailed survey that evaluates factors that make colleges and universities a good fit for service members, military veterans and their families.

“It is a great honor to be recognized for the support we provide to our military-related students every day,” said Bill Brown, executive director of TCC’s Center for Military and Veterans Education (CMVE), which provides consolidated training and support for military-related students on each campus. “For many military members and veterans, the hardest part of getting an education can be getting started. They appreciate the one-on-one assistance offered to them by staff members at the CMVE, all former military, veterans or family members themselves who understand firsthand what it is like to get started in their education.”

Brown said the CMVE continues to work to secure approval for students to use GI Bill® benefits and SkillBridge funding. TCC’s Career Studies Certificate in Inside Machinist is among the new programs established in the last year. The certificate, which provides opportunity in the manufacturing and maritime industries, is ideal for veterans and transitioning military.

The college partners with the Department of Energy and Navy Region Mid-Atlantic for its Solar Ready Vets program that prepares transitioning sailors for potential employment in the solar industry upon discharge.

Military Times’ annual Best Colleges survey asks colleges and universities to meticulously document a tremendous array of services, special rules, accommodations and financial incentives offered to students with military ties; and to describe many aspects of veteran culture on a campus.

The rankings are published in a Military Times magazine sent to subscribers the week of Nov. 20, as well as online at MilitaryTimes.com, ArmyTimes.com, NavyTimes.com, AirForceTimes.com and MarineCorpsTimes.com.

The 2018 rankings and survey methodology can be found on the Military Times website.