Thomas Moss would be proud of these students

Three high achievers recognized for excellence by scholarship that honors the namesake of the Norfolk Campus. 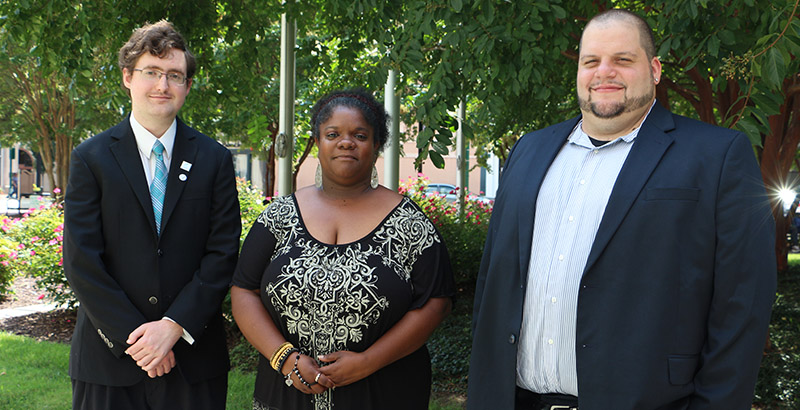 And your 2017 Thomas Moss Scholars are…

The Thomas Moss scholarship honors the namesake of the Norfolk Campus by recognizing students for their academic excellence.

Justice, who attended Granby High School prior to TCC, plans a career in international business with a focus on East Asia.

“This scholarship will provide me with the necessary tools for education nowadays,” he said. “Also, knowing that I have the support of so many people at TCC is going to give me the confidence to succeed at ODU.”

TCC business Professor Peter Shaw is among his mentors. “He had a game plan of what he wanted to do from the start,” he said. “I believe he will be one of TCC’s most successful alumni.”

Vernon, who hopes to work overseas in Europe or South America, plans to become a teacher.

“I’ve learned that some of the best teachers at TCC really do care about their students,” he said. “They’ve inspired me to become a teacher. I want to do what they do.”

“David’s work in my class always went above and beyond what the assignment required of him,” said English instructor Sylvie Shapero. “He was generally interested in the topics that he researched and wrote about, connecting them to a bigger issue and larger audience.”

As a student in hospitality management, Lucas takes a mix of classes in the hotel and restaurant industries.

“Monique is a very driven and passionate student,” said Amie Burns, culinary arts instructor. “I could always count on her to be enthusiastic and put out the best product in class. She loves what she does and it shows.”
About this scholarship
Moss was speaker of the House of Delegates in the mid-1990s, when TCC received startup funds from the General Assembly to put its Norfolk Campus downtown. He served for many years as Norfolk city treasurer.

The Thomas Moss Scholars Fund was established in 2000 by the Norfolk Faculty Senate to recognize full-time students whose academic achievements and leadership have reached the highest levels.

To learn how you can support a TCC scholar, contact the TCC Educational Foundation at 757-822-1080 or foundation@tcc.edu.