More than 1,600 students will receive degrees and certificates. 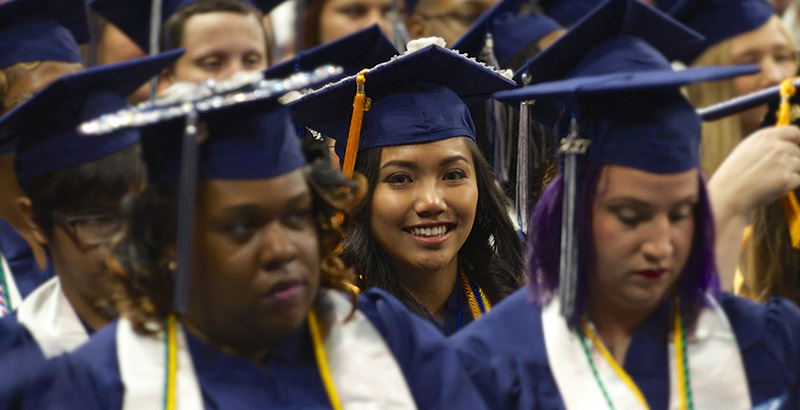 Tidewater Community College will celebrate the 100th anniversary of Naval Station Norfolk during its 65th Commencement Exercises on Dec. 18.

The event will be streamed live at tcc.edu/commencement. More than 1,600 graduates will receive associate degrees and certificates.

Navy Cmdr. Shannon L. Wiens, a former TCC student, will deliver the keynote address at the ceremony, which begins at 6 p.m. at the Ted Constant Convocation Center.

A native of Chesapeake, Wiens attended TCC from 1994 to 1997 and then transferred to Old Dominion University. She was commissioned through the ROTC Program at ODU in 2000 with a bachelor’s in geology.

During her 17 years with the Navy, Wiens deployed in support of Operations Enduring Freedom and Iraqi Freedom. Currently, she is executive officer of Beachmaster Unit Two at Joint Expeditionary Base Little Creek-Fort Story.

Wiens graduated from Naval Postgraduate School with a master’s in systems engineering and analysis. She is also a graduate of the Joint and Combined Warfighting School at the Joint Forces Staff Colle

Student speaker Jessica Evans credits TCC with helping her lay the foundation for a successful future. She will graduate with a pair of associate degrees in social sciences and business administration earned in less than two years.

Evans’ six years of service with the Army National Guard included a deployment to Iraq, where she sustained a traumatic brain injury. Refusing to let her circumstances define her, the Portsmouth resident enrolled at TCC, where the college’s support services helped her achieve inside and outside the classroom.

Evans will attend Norfolk State University to pursue a bachelor’s in construction technology.

Lt. Dominic Mirenda will provide the invocation and benediction for the event. Mirenda, command chaplain for Naval Special Warfare Group Ten at Joint Expeditionary Base Little Creek-Fort Story, provides spiritual leadership, ethical and cultural advisement, and pastoral and specialized counseling to Special Operations Forces and those who support them.